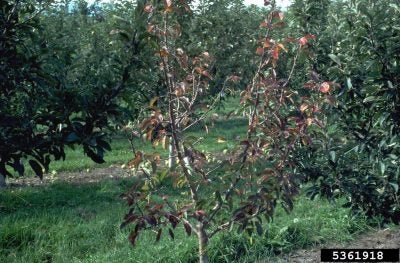 We love our apples and growing your own is a joy, but not without its challenges. One disease that commonly afflicts apples is Phytophthora collar rot, also referred to as crown rot or collar rot. All species of stone and pome fruit may be afflicted by fruit tree root rot, usually when the trees are in their prime fruit bearing years– between three and eight years of age. What are the signs of root rot in apple trees and is there a Phytophthora treatment for apple trees?

The apple tree root diseases called crown rot is caused by Phytophthora cactorum, which also attacks pears. Some rootstocks are more susceptible to the disease than others, with dwarf rootstocks being the most vulnerable. It is often seen in low lying areas of poorly draining soil.

Symptoms of root rot in apple trees appear in the spring and are heralded by a delay in bud break, discolored leaves, and twig dieback. The most observable indicator of apple tree root rot is a girdling of the trunk wherein the bark browns and when wet becomes slimy. If the roots were to be examined, water-soaked necrotic tissue at the base of the root would be evident. This necrotic area usually extends up into the graft union.

Fruit tree root rot caused by this fungal disease can survive in the soil for many years as spores. These spores are resistant to drought and to a lesser extent, chemicals. Fungal growth explodes with cool temperatures, around 56 degrees F. (13 C.), and ample rainfall. Hence, the highest incidence of fruit tree rot is during blossom time in April and during dormancy onset in September.

This disease is difficult to control, and once infection is discovered, it is usually too late to treat, so choose rootstock with care. While no one rootstock is completely resistant to crown rot, avoid dwarf apple rootstocks, which are particularly susceptible. Of the standard sized apple trees, the following have good or moderate resistance to the disease:

Also important to combat fruit tree root rot is site selection. Plant trees in raised beds, if possible, or at the very least, channel water away from the trunk. Don’t plant the tree with the graft union below the soil line or plant in areas of heavy, poorly draining soil.

Stake or otherwise support young trees. Windy weather can cause them to rock back and forth, resulting in a well opening up around the tree that can then collect water, leading to cold injury and collar rot.

If the tree is already infected, there are limited measures to be taken. That said, you can remove the soil at the base of infected trees to expose the cankered area. Leave this area exposed to air to allow it to dry. Drying may prevent further infection. Also, spray the lower trunk with fixed copper fungicide using 2 to 3 tablespoons (30-44 ml.) of fungicide per one gallon (4 L.) of water. Once the trunk has dried out, refill the area around the trunk with fresh soil late in the autumn.

Lastly, reduce the frequency and length of irrigation, especially if the soil seems to be saturated for long periods of time– which is an invitation to Phytophthora fungal disease when temperatures are mild, between 60 and 70 degrees F. (16-21 C.).