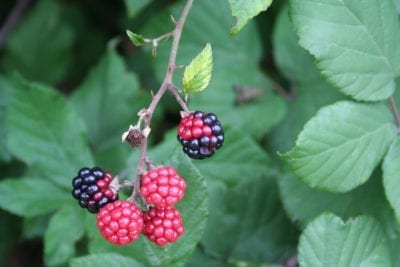 If your blackberries refuse to ripen, they may be suffering from redberry mite syndrome. The microscopic, four-legged mites get inside the berries and cause serious damage. Redberry mite control depends on insecticides, including horticultural oils and sulfur-based insecticides.

Redberry mites (Acalitus essigi) spend their winters deep inside blackberry buds and bud scales that will later become new shoots and leaves. In spring, the mites gradually move to new shoots and flowers, and eventually enter the berries. They concentrate around the base of the berry and in the core.

Once they find their way to the fruit, the redberry mites inject the berries with a toxin as they feed. This toxin prevents the berries from ripening. You can identify redberry mite damage by the small, hard, red or green berries. You may see normal and damaged berries hanging in the same cluster. Damaged berries are inedible and there is nothing you can do to save them, but you can plan early to prevent damage to next year’s crop.

Horticultural oils cause less damage to the crop than sulfur

products. Apply the oils at two to three week intervals as directed on the label. Never apply horticultural oils within a month of applying a sulfur product. Combining the two products at close intervals can seriously damage the plant. You should also avoid horticultural oils when temperatures are higher than 90 degrees Fahrenheit (32 C.) to prevent damage to the blackberry bush.

Sulfur products are more toxic than horticultural oils. Test them on a small part of the plant before spraying the entire plant. The timing of application, called delayed-dormant application, is a bit tricky. You want to catch the bush just after it breaks dormancy. Wait until the buds begin to swell, but before new leaves begin to open.