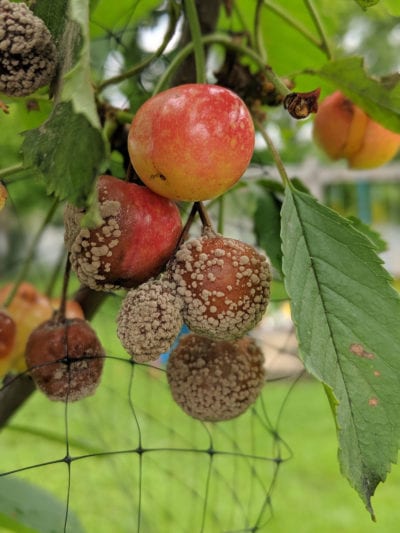 Image by Gardening Know How, via Heather Rhoades

Do you have sweet cherries that develop mold or canker? They probably have cherry brown rot. Unfortunately, warm, wet weather conditions that are a necessity to cherry trees bring with it a higher incidence of fungal disease such as this.

The disease not only affects cherries but also can be present in peaches, plums, apricots, and almonds. Brown rot cherry symptoms can increase exponentially in as little as 24 hours and decimate a crop. Read on for more information on treating cherry brown rot.

Brown rot on cherry trees is caused by the fungus Monilinia fructicola, which spreads rapidly during ripening and in storage post-harvest. The pathogen responsible overwinters in dropped fruit or still-attached mummy fruit and any other affected plant material.

Brown rot in cherries is fostered by warm, wet weather. When spring arrives with its showers and warmer temperatures, the fungus awakens and begins to bloom. All those mummies still on the plant spread spores to developing flowers and young fruit. The longer the period of wet conditions, the shorter the incubation time, thus symptoms develop more rapidly.

Spores are produced first on early maturing cherries and then spread to late maturing trees, affecting both edible and ornamental cultivars. Not only that, but during ripening, fruit is susceptible to insects and fruit cracking, leaving open wounds ideal for spore infection.

Brown rot on a cherry tree may also cause twig blight, which gradually weakens trees and makes them more vulnerable to other fungal infections and to winter injury.

The initial symptoms of brown rot in cherry trees are browning and death of blossoms. While blooms that are killed by brown rot stay attached to the branch with a sticky residue, those that are killed due to frost fall to the ground.

Twig blight, most common in apricots, may also afflict a tree with brown rot as the infection progresses from the infected bloom to the spur and into the branch, resulting in a canker. These cankers are discolored and often covered with a sticky residue between the diseased and healthy portions of the branch. The cankers may girdle the entire branch as the disease progresses which causes the leaves to wilt and brown.

On fruit, the disease manifests as small, firm, brown lesions. The lesion grows rapidly until the entire fruit is covered. Over time, the fruit dries and shrivels but stays attached to the tree even into the successive year.

All parts of the tree infected with brown rot become covered with tan to gray powdery spores, particularly when conditions are damp and temperatures are above 41 degrees F. (5 C.).

A cherry tree with brown rot will have lower yields and poor vigor. It’s important to treat for this disease early if you want a significant harvest. Several controls are possible, but the best defense is using resistant cultivars.

The best defense is to use resistant cultivars. If you already have a cherry tree, remove the mummies, prune off infected plant material, and rake up under the tree. Prune the tree to create an open canopy with good air circulation. Also, remove any branches with cankers or twigs that have died from the disease. Water from under the leaves.

Because the fungus lingers in fruit detritus, keeping the area surrounding the trees free from fallen fruit and other debris is of paramount importance. While the disease will not be eradicated, the number of spores produced will be lowered, which makes brown rot easier to control.

If sanitation and pruning have had no effect on the severity of the disease, fungicides may be used. Copper fungicides will have some benefit but are not good enough in certain conditions. Fungicides must be applied twice, first when blossoms begin to open and then again two to three weeks before harvest. Do not apply the fungicide when fruit is still green. Wait until the fruit is ripening. Always read and follow the manufacturer’s instructions for fungicide application.

Additionally, any product with pyrethrins and sulfur can provide good organic control. Sanitizing and cleaning up old plant material are the easiest and least toxic methods of cherry brown rot treatment.