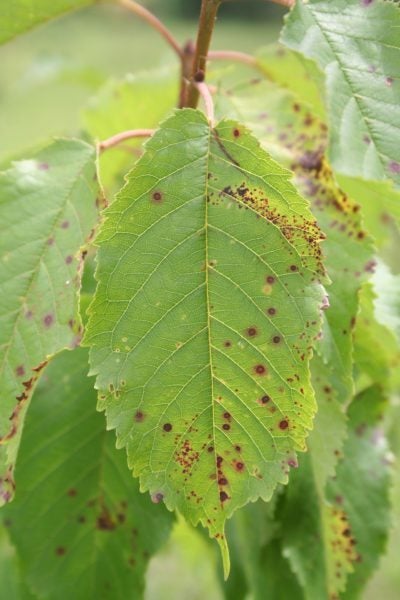 Cherry leaf spot is usually considered a disease of low concern, however, in severe cases it can cause defoliation and failure of fruit to develop. It primarily occurs on tart cherry crops. Cherry leaves with spots are the first symptoms, especially on new leaves. The spots on cherry leaves are easy to confuse with several other fungal diseases. Knowing what the signs are and implementing early treatment can help save your crop.

Cherry season is a cheery time of year with pies and preserves the result of a good harvest. Leaf spots on cherry can signify a disease that could compromise that yield. What causes cherry leaf spots? Most commonly a fungus called Blumeriella jaapii, once known as Coccomyces hiemali. It is prevalent in periods of intense rainfall.

The disease first appears on upper parts of leaves. The spots on cherry leaves will measure 1/8 to 1/4 inch (.318 to .64 cm.) in diameter. These fungal leaf spots on cherry trees are circular and start as red to purple in tone. As the disease develops, the spots become rusty brown to totally brown and begin to appear on the undersides of the leaves.

Whitish downy material appears in the centers of the spots, which is the spore of the fungus. The spores may drop out, making tiny shot holes in the leaves.

The causal fungi overwinter on infected dropped leaves. In the warming temperatures of spring with accompanying rainfall, the fungi start to grow and produce spores. These are transmitted through rain splash and wind to land on uninfected foliage.

Temperatures that enhance spore formation are between 58 and 73 degrees F. (14-23 C.). The disease attacks the stomata of a leaf, which is not open until young leaves unfurl. Then spots can appear within 10 to 15 days after the leaf has become infected. The period between May and June is when the disease is most active.

Once you have cherry leaves with spots, the best control is to set up preventive measures for the next season. Fungicides are not very affective once the tree is in full leaf and much of the foliage is infected.

Begin removing and destroying the dropped leaves at the understory. These contain spores that will overwinter and infect the next season’s new leaves. In orchard situations, the best option may be to mow the dropped leaves to chop them up and hasten composting.