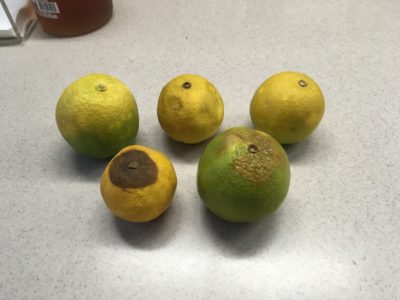 Image by Maeperski via Q&A

With their brightly colored, fragrant fruits, there’s no reason not to grow citrus, even if you have to have a greenhouse in order to do it. Sometimes, though, your beautiful crop may develop water-soaked spots before they rot out entirely. This condition, known as Brown Rot in citrus, can be a serious risk to your morning OJ if you don’t take swift action. If brown rot is plaguing your oranges, lemons, limes, or other citrus fruits, then this article should help.

Brown Rot is caused by a common garden fungal pest, Phytophthora spp. This fungus is also responsible for diseases like damping off, which kills seedlings as they’re developing. Because of its flexibility, the Phytophthora fungus can appear during nearly any stage of growth and wreak havoc among a wide range of garden plants. In citrus, it primarily targets mature or nearly-mature fruits.

Brown Rot of citrus fruit typically starts as a small discolored spot, but rapidly spreads across the affected fruit’s surface, creating leathery lesions that have a potent smell. Other pathogens may take advantage of the breach in the fruit’s tough surface, complicating the diagnosis. Generally, Brown Rot is worst on the lowest hanging fruits; the most common transmission path is via infected soil that’s splashed up onto the fruit during watering or heavy rains.

Brown Rot control on citrus is usually directed at preventative measures, rather than treating symptoms as they appear. Increasing circulation to prevent standing water, trimming trees away from the ground, and removing all debris and damaged fruits from your citrus are good first-line attacks. If Brown Rot persists despite your best efforts, scheduled fungicide sprays may be necessary.

Copper salts can be used as a protective treatment, but if you know that Brown Rot is a problem in your citrus, fosetyl-al or potassium phosphite are much better options. Spray all your fruit with the treatment of your choice in late July before signs of brown rot appear in order to kill the Phytophthora spores. If your Brown Rot is particularly resilient, a follow-up spray in October may be necessary.