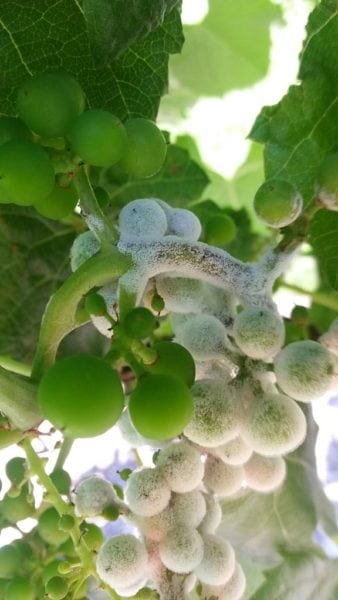 Downy mildew on grapes is a serious fungal disease that wreaks havoc in vineyards around the world, especially when the weather is humid, rainy, and mild. The disease affects both wild and cultivated grapes. Grape downy mildew control requires gardening practices that improve growing conditions and minimize water on the leaves. Read on to learn more.

About Grapes with Downy Mildew

Early signs of downy mildew on grapes include small, greenish-yellow spots on the leaves, primarily between the veins. The lesions may be difficult to see, but they will eventually enlarge, and, in severe infections, may turn dark brown and brittle before dropping.

Early symptoms of downy mildew on grapes may also appear on tendrils and stems as shiny, water-soaked depressions with fuzzy fungal growth. Young shoots and tendrils are stunted and distorted. Grapes with downy mildew turn soft and light brown, and may be coated with a dense, gray fungal growth. Infected fruit will never develop normally.

Penn State Extension recommends spraying grapevines with a fungicide just before blossoms open, seven to 10 days later, and 10 to 14 days after that, followed by a final application three weeks later. If downy mildew on grapes was severe the previous season, you may want to begin the process a little earlier by spraying the vines about two weeks before the first blooms.

Your county extension office can help you select the best product for treating grape downy mildew.

Additional tips on grape downy mildew control include planting disease-resistant vines, as some varieties are highly susceptible to downy mildew.

Choose a planting site where the grapevines are exposed to sunlight all day. Space vines properly to allow sufficient air circulation.

Be careful not to overwater. If you use overhead sprinklers, extend the time between watering as much as possible. Otherwise, water at the base of the plant.

Ensure the vines are supported so they don’t rest on the soil. Rake the area well at the end of the season to remove diseased plant debris. Cultivate in the spring to bury infected leaves and mummified berries that may remain from the previous growing season.

Prune grapevines annually, during the dormant period. Leave only strong, healthy growth from the previous year. Control weeds and tall grass around the plants and in the surrounding area.