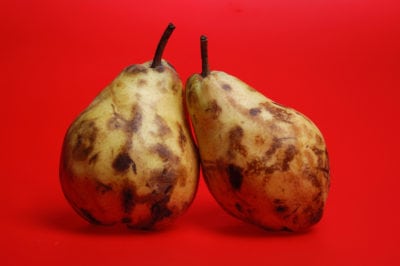 About Sooty Blotch on Pears

Pears with sooty blotch are under attack by a fungus or perhaps several fungi. These can include:

The fungi that cause sooty blotch causes black smudges on the skin of the pear, smudges that are actually fungal strands. Pears with sooty blotch look a little dirty, as if someone handled them with sooty fingers.

Sooty blotch fungi overwinter in infected plants. It can reside in brambles and grass as well as other fruit trees. The fungi thrive in wet springs and summers when temperatures are still cool. Sooty blotch on pears detracts from the appearance of the fruit. Pears grown commercially that get this disease are not marketable even though the pathogens do not penetrate into the flesh.

You can reduce your pear’s risk of getting sooty blotch by the cultural care you offer your orchard. A primary goal is preventing your pear trees from remaining wet after the rain since the fungi requires periods of wetness to thrive.

Pruning your pear trees can provide control of pear sooty blotch. An annual pruning opens up the tree to sun and wind, allowing interior fruit to dry. When many fruits are competing for space, the pears touch one another and remain wet in those shadowed areas. Thinning fruit so that the young pears don’t touch helps prevent sooty blotch.

Likewise, mowing the orchard prevents low-hanging fruit from getting wet by touching high wet grass. Removing brambles in the area also provides control of pear sooty blotch. Brambles are major hosts of the fungi and can pass it to orchards in the area.

Fungicides can also serve as part of pear sooty both treatment. Use any fungicide according to label directions.