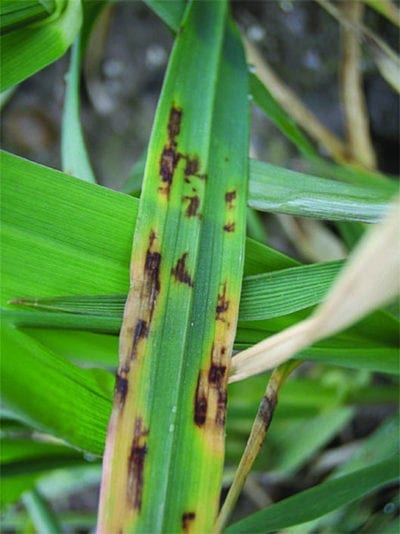 Whether being grown as a cereal grain crop, for its use by homebrew beer enthusiasts, or used as a cover crop, the addition of barley into the garden or landscape can be beneficial for several reasons. Growers wishing to improve soil and reclaim unused portions of farms and fields can plant barley to suppress weeds, as well as increase soil fertility. Regardless of the rationale behind planting, one very common barley issue, called barley net blotch, can be a major cause of frustration and may even result in loss of yields for growers. Luckily, the application of several simple garden practices can help to reduce the occurrence of this fungal disease.

What is Net Blotch on Barley?

Barley with net blotch is caused by a fungus called Helminthosporium teres syn. Pyrenophora teres. Found mostly in wild barley and other related domestic cultivars, barley net blotch damages the leaves and, in severe cases, seeds of the plants, causing spread of the disease, and possible reduction of yields.

Early signs of barley with net blotch manifest in the form of green or brown spots on the foliage of the barley plants. As the fungal disease progresses in the plants, the spots begin to darken, elongate, and enlarge. Yellowing around the dark spots indicate further progression of the disease.

Eventually, the dark spots may spread throughout the entirety of the leaves until they die and drop from the plant. Net blotch may also negatively impact the formation and quality of seeds within the barley harvest.

How to Stop Barley Net Blotch

While it may be too late to treat plants already infected with this fungal disease, the best method of control is prevention. Fungus that causes net blotch on barley is most active during periods of mild temperatures and high humidity. For this reason, growers may benefit from late plantings in order to avoid infection during the fall and spring seasons.

Growers can also hope to avoid subsequent barley net blotch infections in the garden by maintaining a schedule of yearly crop rotation. Additionally, gardeners should make certain to remove all infected barley plant debris, as well as remove any volunteer plants from the growing area. This is essential, as the fungal spores are very likely to overwinter among plant residue.

Printer Friendly Version
Read more about Barley
Next>
Did you find this helpful? Share it with your friends!
FacebookTweetPinEmail
Related Articles
Newest Articles
You might also like…
Additional Help & Information