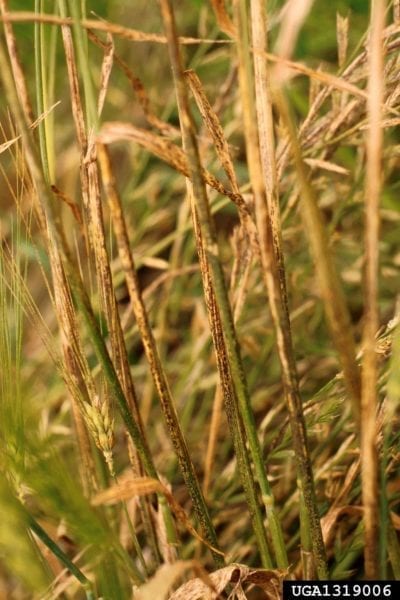 Barley is one of the oldest cultivated grains. It has not only been used as a human food source but for animal fodder and alcohol production. Leaf rust on barley has likely been an attendant disease since its original cultivation around 8,000 BC. This fungal disease can harm the productivity of the plants. Learn how to prevent barley leaf rust and gain bigger yields of healthier plants.

According to barley leaf rust info, these types of fungal disorders seem to be host specific. That means barley leaf rust only occurs on barley and any of its family members. It is a late season disease that can cause crop loss. Historical infections between 1900 and the 1950s infected crops in the U.S. and into Canada. U.S. losses were in the Midwest and Great Plains states. Today, good barley leaf rust control exists and large-scale crop damage is not as common.

Barley leaf rust occurs in years with high humidity and low spring temperatures. It is especially prevalent in crops that were planted late. The symptoms are small, orange masses with a lighter halo on leaf surfaces. These masses are spores, which are windblown to other plants.

The optimal temperatures for spores to grow are 60 to 72 degrees Fahrenheit (16 to 22 C.). The spores can cause secondary infections during this time at 7- to 10-day intervals. When severely affected, plant sheaves will display lesions and plants will die.

There are several cultivars that are resistant to leaf rust on barley. A University of Queensland scientist, Dr. Lee Hickey, uncovered a gene that provides resistance to the disease, as well as to powdery mildew. In certain areas, the Star of Bethlehem plant harbors the spores and should be kept eradicated well away from barley fields.

Young, self-sown barley plants should be removed, as they provide a place for the rust fungus to survive. Removal is especially important during wet summers. Spacing and good cultural care are also keys to preventing and treating barley leaf rust.

Most of the barley grown today is from resistant strains. Heirloom varieties are more prone to the disease, as they have no inbred opposition to the fungus. Foliar fungicides offer the best protection. They must be applied at the first sign of lesions. Alternatively, you can apply systemic fungicides between tillering and heading.

Unfortunately, rust diseases commonly mutate into a new race, so what works one season may not work the next. Vigilance is crucial to managing this disease, as is the use of resistant cultivars, which can reduce the chances of the fungus mutating.