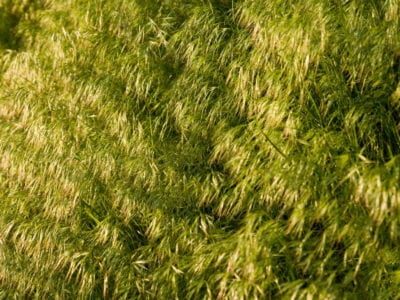 Field brome grass (Bromus arvensis) is a type of winter annual grass native to Europe. First introduced to the United States in the 1920s, it can be used as a field brome cover crop to control erosion and enrich the soil.

What is Field Brome?

Field brome belongs to the brome grass genus containing over 100 species of annual and perennial grasses. Some brome grasses are important forage plants while others are invasive species that compete with other native pasture plants.

Field brome can be differentiated from other brome species by the soft, hair-like fuzz that grows on the lower leaves and stems, or culms. This grass can be found growing wild along roadsides, wastelands, and in pastures or croplands throughout the United States and southern provinces of Canada.

When using field brome as a cover crop to prevent soil erosion, sow seeds in late summer or early autumn. During the fall, plant growth remains low to the ground with dense foliage and considerable root development. A field brome cover crop is suitable for grazing during the fall and early spring. In most areas, it is winter hardy.

Field brome experiences rapid growth and early flowering in the spring. Seed heads usually appear by late spring or early summer, after which the grass plant dies back. When using it for a green manure crop, till the plants under during the pre-bloom stage. The grass is a proficient seed producer.

In many areas, field brome grass has the potential to become an invasive species. Due to its early spring growth, it can easily crowd out native grass species which come out of winter dormancy later in the season. Field brome robs the soil of moisture and nitrogen, making it even more difficult for native plants to flourish.

Before planting in your area, it’s advisable to contact your local cooperative extension office or state agricultural department for field brome information regarding its current status and recommended uses.