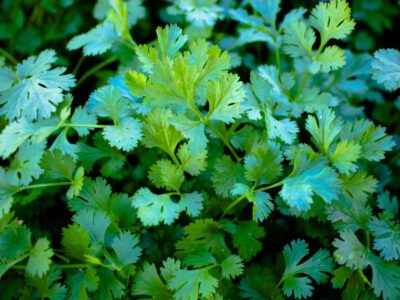 White, fluffy growth on the leaves of a cilantro plant signify an outbreak of a fungus, powdery mildew. Powdery mildew of cilantro is unlikely to kill the plant but does make it less productive and the leaves can develop an “off” flavor. The fungus appears on leaves and stems. Simple cultivation tips early in the season, as well as an understanding of why powdery mildew on cilantro occurs, can help nip this fungus in the bud.

Powdery mildew of cilantro shows up when weather is warm but the foliage comes in contact with moisture that does not dry in an adequate amount of time. This could be from watering the plant overhead, or from nighttime dew or rain. When moisture gets on leaves and remains there for several hours before drying off, the fungal spores have time to germinate and spread.

The initial signs are usually just a few spots and can be hard to find, but in just a few days the entire leaf surface may be covered in fine white dusty spores. The spores will shake off to some degree, but the bulk of them will still coat the leaf. Washing them off does not work either, as it will wet the leaf and start the process anew.

Once you have discovered that cilantro has white coating on leaves, you need to move onto control measures. However, if this happens to you every year, it is time to think about prevention.

Choose a location for planting that gets good sun exposure. The spores and mycelium of powdery mildew are very sensitive to sunlight. Select a resistant variety of cilantro if possible, and when planting cilantro, make sure there is plenty of space around each plant so air can circulate.

Use drip irrigation to water the roots and not the foliage. If you do water overhead, water in the morning so leaves can dry quickly.

Remove any infected part immediately to help prevent the spread of the disease. In most cases, it takes 7 to 10 days to complete the disease cycle but it can occur in ideal conditions in as little as 72 hours.

Controls for Cilantro with Powdery Mildew

Sulfur foliar spray is effective against powdery mildew. Spray every 7 to 14 days to prevent the fungus from growing. A mixture of garlic crushed in water is high in sulfur and non-toxic.

Baking soda dissolved in water is an effective natural fungicide because it changes the pH on the leaves, making it less hospitable for the fungus.

Because the leaves of cilantro are edible, it is best not to use any professional fungicide sprays. Some gardeners also swear by wetting the leaves with diluted compost tea or urine to prevent mildew from growing.

If all else fails, remove the affected leaves and destroy them. Cilantro grows quickly and a fresh, unaffected crop will arrive in no time.