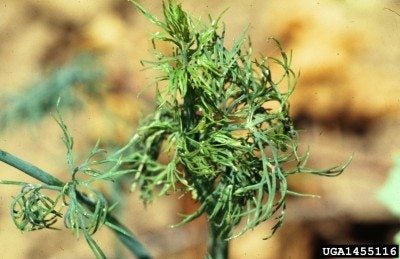 As with most herbs, dill (Anethum graveolens) is a fairly easy to grow plant. Even so, the gardener may have to deal with his or her share of dill plant problems, from pests to dill plant diseases. The following article contains information on identifying and treating diseases affecting dill plants.

Dill is an herbaceous plant grown as an annual. A member of the family Apiaceae, dill is cultivated for its leaves and seeds which are used in foods and medicinally. Dill means “to calm or soothe,” hinting at its ancient use to calm upset stomachs or colicky babies.

Believed to originate in the Mediterranean, dill (like other Mediterranean herbs) can be grown in a variety of soils but thrives in well-draining sandy loam, rich in organic matter. Again, like its Mediterranean relatives, dill is a sun lover and needs 6-8 hours of direct sun each day.

The plant is grown for either its seeds that are produced once the starburst shaped, yellow flower heads begin to die back or for its feathery, fern-like foliage. Dill does not like to be transplanted, so it is best to direct sow in the spring once all danger of frost has passed. Once the plants have emerged (7-21 days later), thin to 12 to 15 inches (31-38 cm.) between plants. Thereafter, promote a bushy habit by regularly pruning the plants back and take care not to overwater.

Once the plants have established, they are less likely to succumb to dill plant problems. That said, there are always the aphids that seem to be drawn to anything green and a plethora of other pests that must be watched for. Dill plant diseases are generally more deadly than pest infestation, but pests often are the source of dill diseases. Identifying and prompt treating of these issues with dill are the keys to saving the dill plants.

As mentioned, insects are often the vectors for disease and aphids are one of the major culprits. Aphid infestations may result in the dill acquiring Carrot Motley Dwarf disease. This disease is caused by two viruses, carrot redleaf virus and carrot mottle virus, both of which must be present to infect the plant.

The disease causes yellow and red discoloration of leaves and general stunting of plant growth. As the name suggests, carrots are the origin for this disease, the aphids just pass it along. To prevent this disease of dill, control aphids with insecticidal soap and avoid planting the herb near areas of the garden where carrots have overwintered.

Other diseases affecting dill plants are not insect related at all but fungal. Cercospora leaf blight fungus is one such disease that causes necrotic areas on the plant accompanied by a characteristic halo. These dying blemishes begin to blend together, resulting in large necrotic regions with the result of leaf die off. This disease may be the result of infested seed that is then spread via wind, rain, or irrigation. To thwart cercospora leaf blight, use disease free seeds, rotate crops, eliminate crop debris, and use fungicide sprays according to the manufacturer’s instructions.

Another fungal disease, damping off, may also afflict dill. This disease results in soft, rotting seeds which do not germinate, or seedlings that emerge with reddish lesions around their stems and soon after die. Fungal spores can be spread in water, soil, or on equipment. Treatment involves applying a fungicide to seeds prior to planting; planting in raised beds to aid in soil drainage; and avoiding planting in cool, wet, poorly draining soil.

There are a few common denominators when treating disease issues with dill. These include:

Printer Friendly Version
Read more about Dill
<PreviousNext>
Did you find this helpful? Share it with your friends!
FacebookTweetPinEmail
Related Articles
Newest Articles
You might also like…
Additional Help & Information