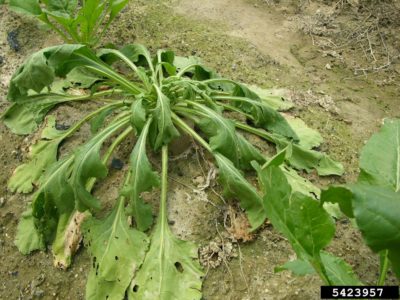 Unfortunately, many new vegetable gardeners can be turned off to gardening by crop loss from very common and preventable fungal diseases. One minute the plants can be thriving, the next minute leaves are yellow and wilting, covered in spots, and the fruits and vegetables they were so excited to grow themselves look rotted and distorted. These gardeners wonder what they did wrong when, in fact, sometimes fungus just happens regardless of your level of gardening expertise. One such fungal disease that gardeners have very little control over and is barely noticeable until it is too late is southern blight on beets. What is southern blight? Continue reading for the answer.

About Southern Blight on Beets

Southern blight is a fungal disease that is scientifically known as Sclerotium rolfsii. In addition to beet plants, it can affect over five hundred plant varieties. Some fruits and vegetables it commonly affects are:

Southern blight can even affect ornamental plants such as:

Southern blight is a soil-borne disease that is most prevalent in semi-tropical to tropical areas and the Southeastern U.S. However, it can happen in any location where cool, wet spring weather quickly becomes hot, humid summer weather. Southern blight spores spread the most on humid days that are about 80-95 F. (27-35 C.), but they can still spread on cooler days. It is spread from direct plant contact with infected soil or the splashing up of infected soil during rain or watering.

In plants that form fruits on aerial stems, like tomatoes, symptoms of southern blight will first become present on lower stems and foliage. These plants can be diagnosed and treated before resulting in fruit loss. However, tuberous vegetables and vegetables that form in the soil, like beets, may not be diagnosed until the vegetables are severely infected.

Beets with southern blight are usually not diagnosed until the foliage begins to yellow and wilt. By that time, the fruit is full of rotted lesions and may be stunted or distorted. An early symptom of southern blight on beets that is often overlooked is the thin, white thread-like fungus spreading through and on the soil around beet plants and on the beet itself. This thread-like fungus is actually the first stage of the disease and the only point at which the vegetable may be possibly treated and saved.

There is no guaranteed southern blight treatment once the disease has infected the vegetables. At early signs of this disease, you can use fungicides on the plants and the soil around them, but if the vegetables are already distorted and rotting, it is too late.

Prevention is usually the best course of action. Before planting beets in the garden, treat the soil with fungicides. This is especially important if you live in a location prone to southern blight or have had southern blight previously.

Young plants can also be treated with fungicides as soon as they are planted. You may want to try new, disease-resistant varieties of beet plants whenever possible. Also, always sanitize your garden tools between uses. Soil-borne southern blight can be spread from one plant to another from a dirty garden trowel or shovel.