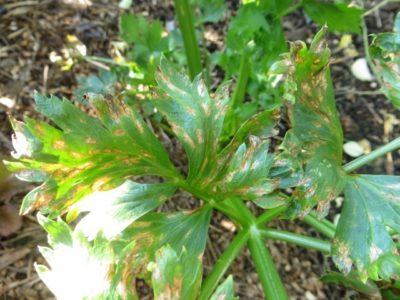 About Cercospora Blight in Celery

Early blight of celery plants is caused by the fungus Cercospora apii. On leaves, this blight manifests as light brown, circular to mildly angular, lesions. These lesions may appear oily or greasy and may be accompanied by yellow halos. The lesions may also have gray fungal growth. The leaf spots dry out and leaf tissue becomes papery, often splitting and cracking. On petioles, long, brown to gray lesions form.

Celery cercospora blight is most common when temperatures are 60 to 86 degrees F. (16-30 C.) for at least 10 hours with a relative humidity that is near 100%. At this time, spores are produced prodigiously and are spread by wind to susceptible celery leaves or petioles. Spores are also released by the movement of farm equipment and splashing water from irrigation or rainfall.

Once the spores land on a host, they germinate, infiltrate the plant tissue, and spread. Symptoms appear within 12 to 14 days of exposure. Additional spores continue to be produced, becoming epidemic. Spores survive on old infected celery debris, on volunteer celery plants, and on seed.

Since the disease is spread via seed, use cercospora resistant seed. Also, spray with a fungicide immediately after transplanting when the plants are most susceptible to the disease. The local extension office for your area will be able to help you with a recommendation of the type of fungicide and spraying frequency. Depending upon the incidence of favorable conditions for your region, the plants may need to be sprayed two to four times per week.

For those growing organically, cultural controls and some copper sprays may be used for organically grown produce.