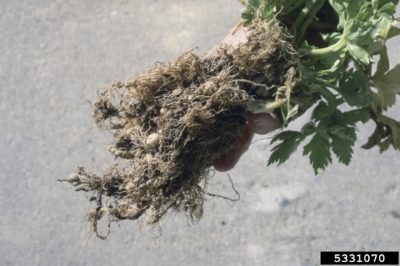 Celery root knot nematode is a microscopic type of worm that attacks the roots. Living in the soil, these worms may attack any number of plants, but celery is one that is susceptible. Knowing how to recognize the signs of a nematode attack and how to manage the infestation will help you save your harvest.

What are Root Knot Nematodes in Celery?

Nematodes are parasitic little roundworms that live in the soil and attack the roots of plants. They cause damage to roots, reducing the volume of root systems and reducing the ability of the plant to take up water and nutrients. Root knot nematodes in celery is just one type of damage that can occur because of this pest.

Celery is particularly affected by root knot nematodes in muck soil. This refers to the richly organic and dark soil that develops from an ancient swamp or lake. The damage caused to celery by this parasite can limit crop production directly but also by making the plants more susceptible to fungal, viral, or bacterial infections.

It is first important to be aware of and watch for the signs of nematode damage of celery. The symptoms of an infestation may show up in the roots and in the above ground parts of the plant. Some signs to look for include:

Unfortunately, controlling root knot nematodes is difficult. Cultural practices may help, such as rotating a patch of garden with plants that are not hosts to nematodes. It is also important to wash gardening equipment carefully after using on infected celery, so as not to spread the worms to other areas. Chemicals used to kill nematodes may have varying effectiveness. They must be introduced into the soil and may require multiple applications to really work.

For a current crop of celery that has been damaged by nematodes, you may not get any harvest. If you catch the infection early, you may try to give your plants additional water and fertilizer to help them overcome the reduced ability to absorb them through the roots. You may, however, simply need to destroy your plants and start over next year.