What Causes Rotting Stalks In Celery: Tips For Treating Celery With Stalk Rot 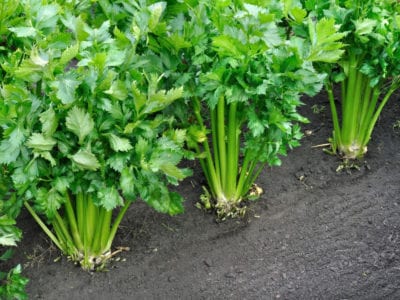 Celery is a challenging plant for home gardeners and small farmers to grow. Since this plant is so picky about its growing conditions, people who make the attempt can end up putting a lot of time into keeping it happy. That’s why it’s heartbreaking when your celery gets infected with a plant disease. Read on for information on one celery disease you may encounter.

What is Stalk Rot in Celery?

Rotting stalks in celery are often a sign of infection with the fungus Rhizoctonia solani. Stalk rot, also called crater rot or basal stalk rot, develops most frequently when the weather is warm and wet. The same soil-borne fungus also causes damping off in seedlings of celery and other garden vegetables.

Stalk rot typically begins near the base of the outer leaf petioles (stalks) after the fungus invades through wounds or open stomata (pores). Reddish brown spots appear, then later enlarge and become cratered. The infection may progress toward the inner stalks and eventually destroy multiple stalks or the entire base of the plant.

Sometimes, Erwinia or other bacteria will take advantage of the lesions to invade the plant, rotting it into a slimy mess.

What to Do for Celery with Stalk Rot

If the infection is present in just a few stalks, strip those off at the base. Once most of the celery stalks are rotten, it is usually too late to save the plant.

If you’ve had stalk rot in your garden, you should take measures to prevent disease spread and recurrence. Clear all plant material from the field at the end of the season. Avoid overwatering, and don’t splash or move soil onto the plants’ crowns.

It’s also a good idea to practice crop rotation, following celery with a plant that’s not a host for Rhizoctonia solani or with a resistant variety. This species produces sclerotia – hard, black masses that look like rodent droppings – which allow the fungus to survive in the soil for several years.

On conventional farms, chlorothalonil is commonly applied as a protectant when stalk rot is noticed on some plants in the field. At home, it’s best to use cultural practices to prevent the disease. These include preventing waterlogging of soil, which you can often do by planting on raised beds.

Be sure any transplants you purchase are disease-free, and do not transplant too deeply.
According to the University of Arizona, providing sulfur fertilizers to plants may help them resist this disease.