Celery Growing Problems: What To Do For Skinny Celery Stalks 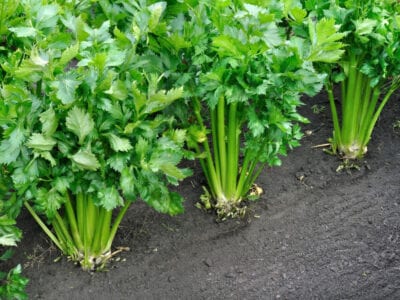 Dieters nibble on it raw. Kids eat it smeared with peanut butter. Cooks use the classic mirepoix, a combination of the trio carrot, onion, and celery to flavor everything from soups and stews to sauces. Originating in the Mediterranean and cultivated since 850 B.C., celery is one of the most commonly eaten vegetables in the United States, with the average American munching on 9 to 10 pounds (4-4.5 kg.) per year.

The popularity of this veggie prompts one to grow it in the home garden. Be aware, however, that celery has its share of growing problems, one of which being celery too thin.

One of the most frequent complaints when growing celery is in regards to the skinny celery stalks. There are a number of reasons why your celery plants are not thick; in other words, stalks of celery too thin.

Harvesting too early– First and foremost, celery requires a lengthy maturation period of 130-140 days. Obviously, if you’re harvesting celery earlier than that, the celery plants are not yet thick enough, as they are still immature. Also, celery is susceptible to frost, even a light one. Of course, in light of this information, a sudden frost may spur early harvesting, resulting in celery that’s too thin.

Lack of water– Another reason for skinny celery stalks may be a lack of water. With no calories, a celery stalk is comprised of mostly water– it’s why many folks correlate celery with dieting– and as such requires vast amounts of irrigation during its growing season. Commercial growers of stalk celery, the type we find in the supermarket, rely on a complex regimen of flood irrigation combined with fertilization to grow thick, crunchy stalks.

Too much heat– Celery plants need at least six hours of sun followed by afternoon shade during the hottest part of the day. The vegetable does not do well in hot weather and this too may affect stalk production and girth.

Insufficient fertilization– The vegetable also needs significantly rich organic matter for vigorous production. Celery’s roots only grow out 6 to 8 inches (15-20 cm.) from the plant and 2 to 3 inches (5-8 cm.) deep, so topsoil is providing the bulk of nutrients for growth. Feed celery with a 5-10-10 fertilizer before transplanting. Mulch once the plant is 6 inches (15 cm.) tall with organic matter and side dress with the 5-10-10 fertilizer of manure tea in the second and third months of growth.

Type of celery grown– Lastly, the type of celery that you are growing may have some bearing on celery plants with thin stalks. Stalk celery, as mentioned, is the type produced for sale in the grocery store and is specifically chosen for its thick stalks. Celery may also be grown for its leaves, which are edible as well and delicious. Cutting celery is bushier, with numerous small stalks, more leaves, and a stronger flavor. One such, Amsterdam Seasoning Celery, is an heirloom variety sold in the herb section (not veggie). Some folks even grow celeriac, which is grown for its round knobby root, not the thin celery-like stalks.