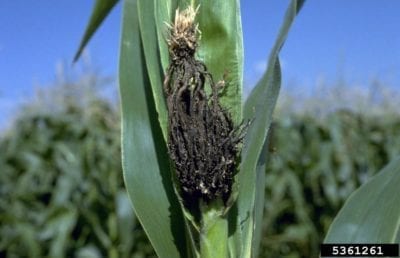 Each year commercial farmers spend a small fortune battling serious crop diseases that can potentially cause massive yield loss. These same diseases can also wreak havoc on the small crop yields of home gardens. One such disease that affects both small and large crops is corn head smut, a serious fungal disease of corn. Continue reading for more information about corn head smut, as well as options for treating corn head smut in the garden.

About Head Smut on Corn

Corn head smut is a fungal disease of corn plants that is caused by the pathogen Sphacelotheca reiliana. It is a systemic disease that can infect a plant as a seed but the symptoms do not appear until the plant is in its flowering and fruiting stages.

Head smut can be easily mistaken for another fungal disease of corn, common smut. However, corn head smut only displays its very specific symptoms on the tassels and heads of corn whereas common smut’s symptoms may appear on any part of an infected corn plant.

Corn with head smut may appear perfectly normal and healthy until the infected plant produces flowers or fruits. Symptoms appear as irregular, black, wiry growth on the corn tassels. Infected corn will be stunted and grow in a teardrop shape – they may also have odd, finger-like extensions growing from the infected cobs.

As stated above, this is a systemic disease. The infection may only show on the cobs and tassels, but the disease is present throughout the plant.

How to Stop Corn Head Smut

Sphacelotheca head smut on corn has led to significant yield loss in commercial corn crops in Nebraska. While there are no effective control methods available for treating corn head smut once symptoms of the disease are present, using fungicide on seeds just before planting has helped control disease outbreaks, especially in smaller home gardens.

Because corn head smut grows and spreads most actively in hot, humid periods, planting corn earlier in the season can help control this disease. Of course, using corn plant hybrids that show resistance to the disease can also be an effective means in how to stop corn head smut.