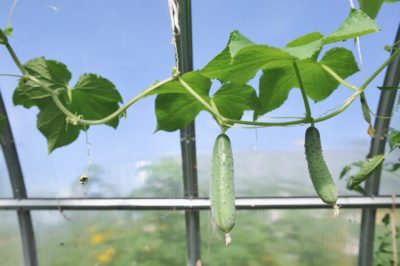 Healthy cucumber plants can get downright out of hand with their rampant vining growth. I’m not complaining; I get lots of fruit, but it made me wonder if I should prune my cucumber vines. Maybe you, too, are wondering if it’s okay to prune cucumbers. So, I did a little research on pruning cucumbers. Here’s what I found out about trimming cucumber vines.

Should I Prune my Cucumber Vine?

The short answer is yes, it’s okay to prune cucumbers, but I guess that doesn’t really say much. Both cucumbers’ vegetative and reproductive growth needs to be balanced. Anyone who’s ever looked at a cucumber plant can see that it is often the vegetative growth that’s left to run amok. So cucumber vine pruning is a way to check that growth and stimulate reproduction, or fruiting.

Cucumber vines generate from a single stem and produce multiple shoots. Pruning cucumbers helps maintain the balance between vine growth and fruit production. Prune outside branches, leaves, flowers, and fruit as needed throughout the growing season.

Trim off all shoots that branch from the main vine stem. Starting at the beginning of the shoot, make a cut as close to the main stem as possible.

Lateral shoots, flowers, and fruit that develop on the lower 5-7 leaf nodes should be removed. This is especially important on seedless greenhouse types of cucumbers, as they can support only one fruit per leaf node. If more than one fruit develops, remove it. Cultivars that produce smaller and seeded fruit can be allowed to have more than one fruit per node so additional fruit does not need to be removed. Otherwise, using sharp pruning shears, remove all fruit except one per leaf.