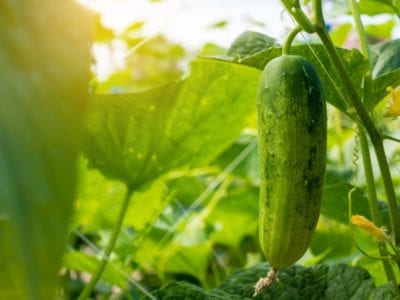 Cucumbers are fairly easy to grow and depending upon the variety, a staple in salads or a must-have for pickling. The types of cucumbers found in the grocery store have thin palatable skins, but sometimes those grown in the garden have cucumber skin that is tough.

Cucumbers grown for eating fresh from the garden are of two kinds. There are cukes suited for growing in the greenhouse and those that are more suitable for growing outdoors. Cucumbers that are meant to be grown outside are called ‘ridge cucumbers.’

Ridge cucumbers tolerate cooler temperatures and are often spiny or bumpy, hence they have a tough cucumber skin. If you dislike that tough cucumber peel, then try growing greenhouse varieties. These are the types of cucumber found at the grocers and have a thin, smooth skin.

Another Reason for Tough Cucumber Skin

The exception to this is pickling cucumbers. If they are left to grow large, they become increasingly bitter, not to mention their unpleasantly tough cucumber peel. In the case of pickling cucumbers, bigger isn’t better!