Dry Rot Of Potatoes: What Causes Dry Rot In Potatoes 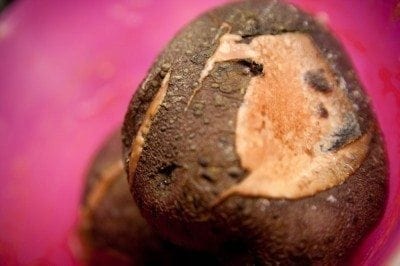 Vegetable gardeners have to do battle with an impressive number of absolutely disgusting plant diseases, but for the potato grower, few can top the level of gross that develops in dry rot of potatoes. With great care, you can prevent potato dry rot disease from spreading throughout your garden, but once a potato tuber is infected, treatment isn’t possible.

What Causes Dry Rot in Potatoes?

Dry rot of potatoes is caused by several fungi in the genus Fusarium. Fusarium are relatively weak fungi, unable to attack potatoes with intact skin, but once inside the tuber, these pathogens cause significant problems and allow other diseases, like bacterial soft rot, to take hold. Potato dry rot disease is most common in the spring and fall and can remain dormant in the soil. Spring disease can rapidly kill off young potato plants, but disease contracted in the fall is far more damaging to established crops.

Potato dry rot symptoms are difficult to detect in the above-ground portions of the plant, but once you’ve dug the tubers you can’t miss it. Affected tubers may be completely dry rotted, crumbling when touched, or at various stages of decay. Cutting a tuber in half will reveal bruise-like brown to black spots that gradually get lighter around the edges and rotted hearts that may contain white, pink, yellow, or tan fungal structures.

How to Treat Dry Rot in Potato

You can’t treat infected potatoes, but you can prevent spreading the disease and minimize opportunities for transmission. Since there is no such thing as a truly dry, rot-free seed potato, efforts should be focused on preventing standing water and mechanical injury to tubers. Handle potatoes carefully from the moment you receive them, waiting to cut seed potatoes until the tissue temperature is above 50 degrees F. (10 C.).

Seed potato fungal treatments of flutolanil-mancozeb or fludioxinil-mancozeb are highly recommended prior to planting, as is waiting to plant until the soil has reached about 60 degrees F. (16 C.). Preventing wounds in the tuber skin is paramount to preserving your harvest; any time you must cut a potato, make sure to disinfect tools well before and after making the cut. Cull out potatoes with obvious disease symptoms, don’t plant these in the ground or compost them.

Take the same care when tending your potato stand as you do with seed potatoes. Carefully brush away the soil when you check your tubers instead of plunging a fork or shovel near them. The more you minimize the risk to your potatoes’ skins, the better chance you have of a harvest free of dry rot.