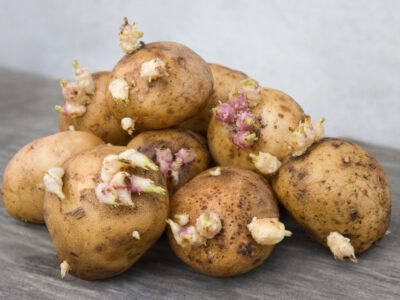 One of the biggest problems growing potatoes in the garden is the possibility of fungus forming on the potatoes. Whether it be late blight fungus, which was responsible for Irish Potato Famine, or early blight, which can be just as devastating to a potato plant, potato fungus can destroy your potato plants. When you use fungicide for seed potatoes though, you can greatly reduce your chances of fungus on your potatoes.

Causes of Fungus on Potatoes

The appearance of potato fungus happens mainly due to infected seed potatoes or planting in infected soil. Most potato fungi not only attack potatoes, but can survive (though may not kill) on other plants in the nightshade family such as tomatoes and peppers.

An excellent way to prevent blight fungus on your potatoes is to treat your seed potatoes with a fungicide before you plant them. Though there are many potato specific fungicides available in the gardening market, in actuality, most general fungicides will work just as well.

After you have cut up your seed potato, thoroughly coat each piece in the fungicide. This will help to kill any potato fungus that may be on the seed potato pieces.

You will also want to treat the soil that you will be planting the potatoes in, especially if you’ve had fungus problems on potatoes in the past or have previously grown other members of the nightshade family (which may carry potato fungus) in that spot.

To treat the soil, pour fungicide evenly over the area and mix it into the soil.

Mix all ingredients thoroughly. Use as you would a commercial potato fungicide.