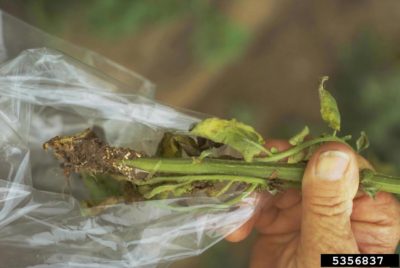 Potato plants with southern blight can be quickly destroyed by this disease. The infection starts at the soil line and soon destroys the plant. Watch for early signs and create the right conditions for preventing southern blight and minimizing the damage it causes to your potato crop.

About Southern Blight of Potatoes

Southern blight is a fungal infection that can affect multiple types of vegetables but which is commonly seen in potatoes. The fungus that causes the infection is called Sclerotium rolfsii. This fungus lives in the soil in masses called sclerotia. If there is a host plant nearby and conditions are right, the fungus will germinate and spread.

Because the fungus survives as sclerotia in the soil, it begins to infest plants right at the soil line. You may not notice this right away, but if you are concerned about the infection, check the stems and the tops of roots of your potato plants regularly.

The infection will begin with white growth at the soil line that turns brown later. You may also see the small, seed-like sclerotia. As the infection surrounds the stem, the plant will decline rapidly, as the leaves yellow and wilt.

The right conditions for southern blight to develop on potatoes are hot temperatures and after a rain. Be on the lookout for the fungus after the first rain that comes down following a hot period of weather. You can take steps to prevent the infection by keeping the area around the stems and soil line of your potato plants clear of debris and by planting them in a raised bed.

To prevent an infection from coming back the next year, you can till the soil under, but be sure to do it deeply. The sclerotia will not survive without oxygen, but they need to be well buried under the soil to be destroyed. If you can grow something else in that part of the garden that is not susceptible to southern blight the following year, this will also help.

Fungicides may also help reduce losses from an infection. In severe cases, especially in commercial farming, the fungus spreads so quickly that the soil has to be fumigated with fungicides.