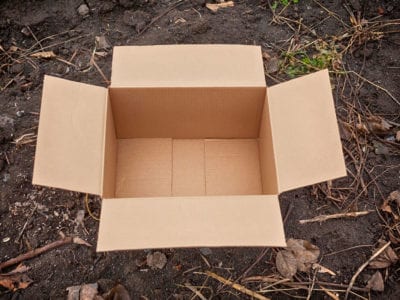 Growing your own potatoes is easy, but for those with bad backs, it’s literally a pain. Sure, you can grow potatoes in a raised bed which will facilitate harvest, but that still requires some digging and an initial investment. A quick trick to various potato plant box ideas that exist includes the thrifty cardboard potato planter.

Can You Grow Potatoes in a Cardboard Box?

Can you really grow potatoes in a cardboard box? Yes. In fact, growing potatoes in cardboard boxes couldn’t be simpler and with little to no cost to the grower. Cardboard for your potato plant box can often be obtained for free from a grocery store or the like, or even from someone who has recently moved and wants those moving boxes gone.

Potato seed for planting potatoes in cardboard boxes can be obtained at nearly any garden center or nursery for very little or, for an experiment with the kids, culled from some old spuds you’ve let go past their prime.

Planting potatoes in cardboard boxes couldn’t be easier. The concept is similar to growing them in containers or even pallets.

First, round up some sturdy cardboard boxes and potato seeds. Try to find boxes that are unprinted and without staples. Open the box so that the top and bottom are open, and the sides are still attached.

Clear an area for the cardboard potato planter. No need to dig down, just remove any large debris and weeds. Choose a spot that is in full sun.

Next, dig a shallow hole an inch (2.5 cm.) or so deep for the potato seed to sit in. Position the sprouts skyward and cover the sides of the spud with soil.

Use bricks or stones to secure the box lapels so they won’t blow away and to seal in moisture, then fill the potato plant box in with mulch. The best mulch is dry grass clippings or straw, but other dry plant matter works as well. Cover the potato seed with about six inches (15 cm.) of mulch and water in well.

That’s really all that is needed when planting potatoes in cardboard boxes. Now, just keep an eye on the cardboard potato planter to monitor it for additional water or mulch needs.

As the potato plant grows and shoots begin to peek through the mulch, add more mulch to cover the growth. Keep adding mulch until the layer is about 10-12 inches (25.5-30.5 cm.) thick. At this juncture, allow the plant to grow without adding mulch but do keep the mulch moist.

The real ease and beauty of planting potatoes in cardboard boxes come when it is harvest time. First, it is a simple matter to check on the size and readiness of the spuds by removing the mulch. Replace the mulch and allow the plant to continue to grow if you want larger potatoes, but if you’re ready to harvest, just remove the box and sift through the mulch for the tubers.

By the time the potatoes are ready to harvest, the box will likely be degrading and can just be added to the compost, dug into the soil, or even just left where it is to break down. You will have gorgeous potatoes with no digging involved that are easy to brush clean.