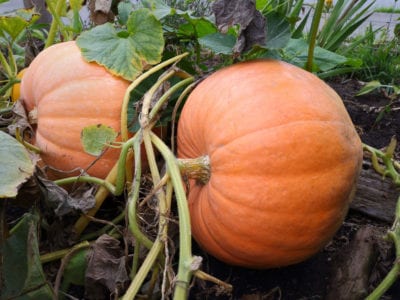 Raised bed gardening has become popular for many urban and suburban gardeners. These compact growing sites require no tilling, are easy to access, and convey a tidy appearance to the backyard. Yet not all plants adapt well to growing in small spaces, which leaves gardeners wondering if growing pumpkins in a raised bed is plausible.

Pumpkins are a type of winter squash which grow on vines that can reach 20 feet (6 m.) in length. Varieties of pumpkins range in size from those small enough to fit in the palm of one’s hand to record breaking giants weighing over a ton.

When garden space is limited, which is often the case with raised bed methods, choosing an appropriately sized variety is the first step for successful pumpkin cultivation.

Miniature or pie varieties as well as those with a semi-bush or compact growth habit are good choices when using a raised garden bed for pumpkins. This information can usually be found on the seed packet, plant tag, or in the catalog description.

To get you started here are a few varieties that do well as raised bed pumpkins:

Once you’ve chosen one or more varieties of pumpkin, planting in raised beds requires forethought as to which direction the vines and fruit will grow. New growth can easily be redirected. However, established vines send out secondary roots from the base of each leaf stem. Disturbing these roots by moving older vines is not recommended.

Placing raised bed pumpkins near the planter’s edge and allowing the vines to trail along the mulch between raised beds is one method. Care must be taken so the vines or developing fruit aren’t damaged by foot traffic.

Additionally, allowing the vines to creep into the lawn means foregoing mowing that area until the pumpkins are harvested. Overgrown grass has the same effect as weeds. Competition for nutrients and water, reduced sunlight, and increased risk of disease make this a poor option for handling vine growth.

Conversely, trellises are an appealing method for growing pumpkins in a raised bed. The trellis must be sturdy enough to support the weight of the pumpkin vines, leaves, and fruit. Pumpkin vines will require training to get them started up the trellis but will then use their tendrils to coil around the supports. Pantyhose makes excellent pumpkin hammocks which “grow” along with the fruit.