Cooking With Pumpkin: How To Grow, Prepare And Store Pumpkins For Cooking 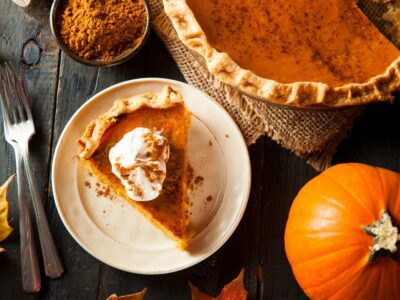 The holidays bring out our favorite recipes. Homemade pumpkin pie is one of the highlights of the fall season and features prominently on Thanksgiving menus. Growing your own pumpkin puree from scratch starts with the right variety. Choose a pie pumpkin plant that produces gourds with natural sweetness and great texture. Pumpkin pie plants need 90-100 days to mature, so start in spring for the proper harvest time.

Store-bought pumpkin puree often contains loads of sugar and preservatives. But it’s easy to make pumpkin puree from scratch, to make your own for homemade pie pumpkin cooking. Start by growing your own organic pumpkins and then follow a few short steps for home grown and homemade pumpkin pie.

You will want one of the smaller pumpkins in most cases. The bigger pumpkins have stringy, often almost tasteless flesh, but the pie varieties are firmer and sweeter. Once you have the perfect variety, it can be grown and turned into pumpkin pie, but also pumpkin soup, muffins, cheesecake, pumpkin butter, and more. Some varieties to try:

You can tell pumpkins are ripe and ready when the rind is firm and the color is deep. But not every pie pumpkin produces an orange gourd, so the last tip may be useless. Instead, try to pierce the skin with a fingernail. If it doesn’t go through easily, the pumpkin is probably ripe. Other signs are the time of year, brown stems, and a hollow sound when you rap on the gourd. Harvest on a dry sunny day. Cut the stem rather than twisting the fruit off the plant. Wash the gourd and you are ready for pie pumpkin cooking.

Preparing a pie pumpkin for cooking usually requires you to cut the whole thing in half. Use a sharp knife and be careful. If you are using smaller pumpkins, they can be pierced and roasted whole. Scoop out the seeds before roasting larger fruits. Bake about half an hour or until the flesh is tender. Use a spoon to remove the flesh after it has cooled enough to handle. You can also microwave smaller pumpkins cut in half for about 15 minutes, but roasting adds to the flavor and gives it a bit of caramelization. You can freeze puree until ready to use, or get going on your favorite pie recipe immediately.