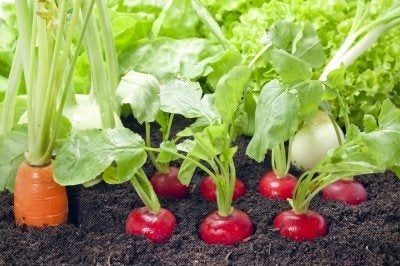 Radishes are one of the quickest producers, often garnering a crop in three to four weeks in spring. Later strains provide roots in six to eight weeks. These plants are tolerant of interplanting provided they are not shaded out by taller species. Many crops make excellent companion plants for radishes, filling in after the roots have been harvested. Installing plants that grow well with radishes can maximize use of the garden bed while harnessing the unique repellent properties of the pungent radish.

Plants That Grow Well With Radishes

Companion planting has been practiced for centuries and was a common Native American practice illustrated perfectly in the “three sisters” method of cropping where corn, squash, and beans were planted to support each other, enhance nitrogen, utilize space, and shade weeds. Each plant has something to offer the other and radish companion plants can fulfill the same needs. Planning is a key feature in intercropping where space, size, growing conditions, and nutrient needs are all considered for a seamlessly compatible garden.

Due to the radish’s quick production and ability to be serial planted, other plants that grow more slowly and need a longer season to produce can be used to complete the garden bed. As long as the radish crop isn’t severely shaded, these little roots will grow at the feet of many species of plants.

Peas and leaf lettuces are started in early spring as soon as the soil is workable. This is also the time to sow radish seeds. The slower growth of the peas and lettuce allows radishes to develop without serious interruption, with harvest time well before the other two vegetables.

Plants which will not be ready for many months, such as tomatoes and peppers, can also be intercropped with the earlier radish harvest.

Plants that help radishes might be strong smelling herbs, nasturtium, and species in the allium family (such as onions).

Pole beans and sweet peas, which rise high above the garden on stakes, help fix nitrogen in soil and enhance production while juicing up the soil for other high nitrogen feeders like lettuces.

Be cautious when planting near brassicas (like broccoli), however, as radishes can attract flea beetles, which will damage this plant’s leaves. Hyssop is also not compatible with radishes.

As you plan your garden and want to incorporate radishes, consider some issues. First, are the seeds spring, summer, or winter forms?

Depending upon your season, you may also get another crop of the cool weather darlings such as snow and snap peas.

Radishes also have attractive foliage in many cases and are useful in annual beds and borders as visual companions to flowers and herbs.