White Rust On Radishes: How To Treat A Radish With White Rust 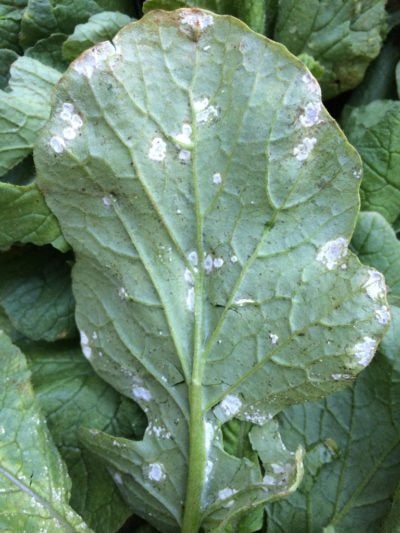 Radishes are one of the easiest, rapidly maturing, and hardy crops to grow. Even so, they do have their share of problems. One of these is radish white rust disease. What causes white rust of radishes? Read on to find out how to identify radishes with white rust and how to manage white rust on radishes.

What is Radish White Rust Disease?

White rust of radishes is caused by the fungus Albugo candida. The disease usually afflicts the leaves, although it may affect other parts of the plant as well. The fungus appears as white, raised spore masses on the underside of the leaves. The area affected may be barely visible to a ½ inch (1 cm.) across or larger.

How is White Rust on Radish Spread?

When mature, the epidermis of the blister-like pustule ruptures, releasing the powdery white spores that are carried on the wind or by splashing water to neighboring plants. The pustules sometimes result in deformed stems, leaves, or flowers.

White rust of crucifers infects only plants in its host group. These include:

The disease is promoted by mild temperatures and high humidity. Dry weather or extreme heat or cold will slow the progression of the disease. The pathogen survives from year to year in the soil, on plant debris, or on overwintering infected crops and weed hosts.

When conditions favor the disease, apply fungicides. The same fungicides that control downy mildew are effective against white rust as well.