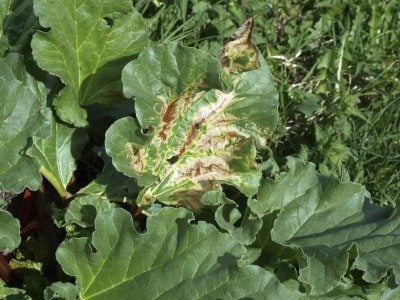 Rhubarb is a cool-weather, perennial vegetable that most people treat as a fruit, using it in sauces and pies. Rhubarb is easy to grow and, for the most part, pest and disease-free. That said, rhubarb is prone to spots on its leaves. What causes rhubarb rust spots and what can be done for rhubarbs that have brown spots? Let’s learn more.

There are a couple of diseases common to rhubarb, which may result in spots on rhubarb leaves. Usually, leaf spots are more of an aesthetic issue and the unsightly spots don’t affect the edibility of the plant. The two most common diseases seen in rhubarb that result in spotted foliage are Ascochyta rei and Ramularia rei.

Both of these pathogens produce spores that spread to other plants via wind and splashing water, causing new infections 10 to 14 days later. The spores also remain in any debris left from season to season. Both Ascochyta and Ramulari fungi spread by infected rootstock.

Excellent sanitation in the garden is the key to thwarting both of these fungi. Select certified healthy rhubarb and plant it in sunny, well-draining, fertile soil. Keep the area around the plants weed- and debris-free and remove and destroy any leaves that appear diseased. In severe cases of infection, a copper compound may be applied to control the leaf spot.

Another disease that may cause spotting is anthracnose stalk rot. Initially, the disease is seen as wilting leaves and large lesions on the stems which enlarge rapidly and turn black. The stalks may become twisted and eventually collapse. As with the previous pathogens, good sanitation practices go a long way to controlling the disease. Remove and dispose of infected foliage or stalks. Also, fertilize the plant as soon as growth appears the next spring and then again as soon as the stalk harvest is over.

These diseases are most common in plants that are stressed, so improving their overall health is the key to decreasing the chances of infection.

What Else Causes Brown Splotches on Rhubarb?

While diseases may cause spots on rhubarb, cultural or environmental conditions may be responsible as well. Brown splotches on rhubarb may be the result of pesticide residue, salts, or a combination of both. These may begin as yellow patches seen upon the leaves, gradually becoming reddish brown.

Also, if your rhubarb has brown spots, the culprit may just be a healthy-growing rhubarb. Yes, that is correct. Rhubarb needs to be divided every so often; ten years is the maximum amount of time a rhubarb patch should go undivided. I’m not saying an undivided patch will die, just that a divided patch will flourish and thrive over an undivided one. It is possible that if you have rhubarb spots on leaves, all you need to do is dig them up and divide them.