Bats As Pollinators: What Plants Do Bats Pollinate 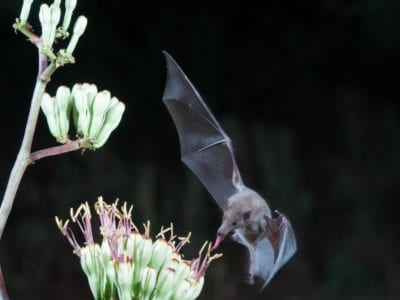 Bats are important pollinators for many plants. However, unlike fuzzy little bees, colorful butterflies and other daytime pollinators, bats show up at night and they don’t get a lot of credit for their hard work. However, these highly effective animals can fly like the wind, and they can carry a tremendous amount of pollen on their face and fur. Are you curious about plants that are pollinated by bats? Read on to learn more about the types of plants bats pollinate.

Facts about Bats as Pollinators

Bats are important pollinators in warm climates – primarily desert and tropical climates such as the Pacific Islands, Southeast Asia and Africa. They are critical pollinators for plants of the American Southwest, including agave plants, Saguaro and organ pipe cactus.

Pollinating is only part of their job, as one bat can eat more than 600 mosquitoes in a single hour. Bats also eat harmful beetles and other crop-decimating pests.

Types of Plants Pollinated by Bats

What plants do bats pollinate? Bats generally pollinate plants that bloom at night. They are attracted to large, white or pale-colored blooms measuring 1 to 3 ½ inches (2.5 to 8.8 cm.) in diameter. Bats like nectar-rich, highly fragrant blooms with a musty, fruity aroma. Flowers are usually tube- or funnel-shaped.

According to the United States Forest Service Rangeland Management Botany Program, more than 300 species of food-producing plants depend on bats for pollination, including:

Other flowering plants that attract and/or are pollinated by bats include: