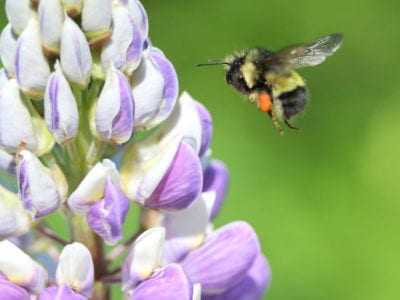 Pollinators are a crucial part of the ecosystem and you can encourage their presence by growing plants they like. To learn about some pollinators native to the northwestern region of the U.S., read on.

Native northwest bees are champion pollinators, buzzing as they move pollen from plant to plant in early spring to late fall, ensuring the continued growth of a wide range of flowering plants. Butterflies aren’t as effective as bees, but they still have an important role to play and they are especially drawn to plants with big, colorful blooms.

The obscure bumblebee is native to the West Coast, from northern Washington to southern California. Common plant hosts include:

Sitka bumblebees are common in the coastal areas of the western United States, from Alaska to California. They like to forage on:

Yellow head bumblebees are common in Canada and the western United States, including Alaska. Also known as yellow-fronted bumblebees, this bee forages on geranium, penstemon, clover, and vetch.

The fuzzy-horned bumblebee is found in the western states and western Canada. It is also known as the mixed bumblebee, orange-belted bumblebee, and tricolored bumblebee. Favored plants include:

Two-form bumblebees are at home in the mountainous areas of the western United States. This bee forages on:

Ruddy Copper is commonly seen in the western mountains. Females lay their eggs on plants in the buckwheat family, primarily docks and sorrels.

Rosner’s Hairstreak is commonly found in British Columbia and Washington, where the butterfly feeds on western red cedar.