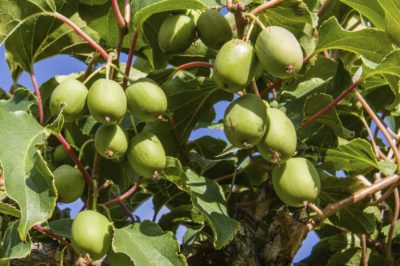 When we think of kiwi fruit, we think of a tropical location. Naturally, something so delicious and exotic must come from an exotic location, right? Actually, kiwi vines can be grown in your own backyard, with some varieties being hardy as far north as zone 4. No need to board a plane to experience fresh kiwi right off the vine. With tips from this article, you can grow your own hardy kiwi plants. Read on to learn about growing kiwi in zone 4.

While the larger, oval, fuzzy kiwi fruit we find in grocery stores is generally hardy to zones 7 and higher, northern gardeners can grow smaller hardy zone 4 kiwi fruit. Often called kiwi berries because of the smaller fruits which grow in clusters on the vine, hardy kiwi offers the same flavor as its larger, fuzzier, and less hardy cousin, Actinidia chinensis. It is also packed with more vitamin C than most citrus fruits.

The varieties Actinidia kolomikta and Actinidia arguta are hardy kiwi vines for zone 4. However, to produce fruit, you need both male and female kiwi vines. Only female vines produce fruit, but a nearby male vine is necessary for pollination. For every 1-9 female kiwi plants, you will need one male kiwi plant. Female varieties of A. kolomitka can only be fertilized by male A. kolomitka. Likewise, female A. arguta can only be fertilized by male A. arguta. The only exception is the variety ‘Issai,’ which is a self-fertile hardy kiwi plant.

Some hardy kiwi vine varieties that need a male for pollination are: