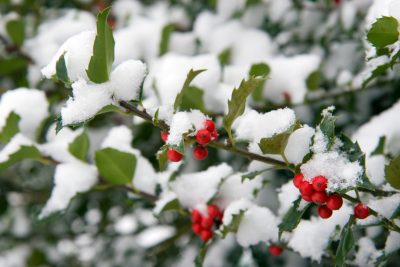 Holly is an attractive evergreen tree or shrub with shiny leaves and bright berries. There are many species of holly (Ilex ssp.) including the popular ornamentals Chinese holly, English holly, and Japanese holly. Unfortunately, for those who live in chilly zone 5, few of these are hardy holly varieties. However, growing holly plants in zone 5 is possible if you select carefully. Read on for information about choosing holly shrubs for zone 5.

You’ll find over 400 species of holly in the world. Many are broadleaf evergreens and offer glossy leaves and bright, bird-pleasing berries. The species range in zone, shape, and cold hardiness. Hollies are not demanding or difficult plants to grow. However, before you start growing holly plants in zone 5, you’ll want to check their cold hardiness.

Chinese, English, and Japanese holly shrubs are not hardy holly varieties. None of these popular plants could be used as zone 5 holly shrubs since none survive zone 5 winters, which can get between -10 and -20 degrees F. (-23 to -29 C.). These species are sometimes hardy to zone 6 but cannot survive the temperatures in zone 5. So, are there holly varieties for those residing in zone 5? Yes, there are. Consider American holly, a native plant, and the blue hollies, also known as the Meserve hollies.

The following holly shrubs are recommended for growing in zone 5 landscapes:

American holly (Ilex opaca) is a plant native to this country. It matures into a lovely pyramid-shaped tree that grows to 50 feet (15 m.) tall with a 40 foot (12 m.) spread. This type of holly thrives in USDA hardiness zones 5 through 9.

Growing the shrub in zone 5 is possible if you plant American holly and site it where it receives four hours or more of direct, unfiltered sunshine per day. This holly shrub needs soil that is acidic, rich, and well-drained.

These evergreen shrubs are more cold tolerant than many types of holly. They have leathery, dark blue-green leaves with spines like English holly leaves. Growing these plants in zone 5 is easy. Plant the cold hardy holly shrubs in well-drained, moist soil. Choose a location where they will get some shade in summer.

If you are looking for zone 5 holly shrubs in this group, consider the blue holly cultivars ‘Blue Prince’ and ‘Blue Princess’. They are the most cold hardy of the series. Other Meserve hybrids that can serve the landscape well include China Boy and China Girl.

Don’t expect rapid growth when you are planting Meserve hollies. They will get to about 10 feet (3 m.) tall in time, but it will take them quite a few years.