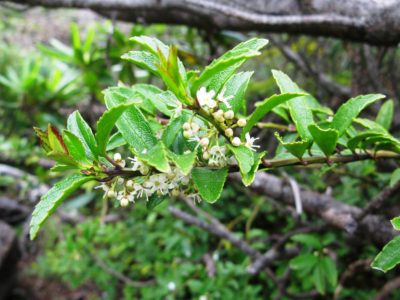 Holly is a great evergreen shrub that adds winter green, interesting texture, and beautiful red berries to the garden. But did you know that there is a low growing holly? You can grow prostrate holly to fill in spaces where a normal-sized shrub would be too big.

Low growing holly is known as prostrate holly, Ilex rugosa, and tsuru holly. The plant is native to Japan and eastern Russia, and has adapted to growing in harsh winter conditions. In its native ecosystem, prostrate holly grows on mountain slopes. The higher up it is, the lower to the ground its growth will be.

The leaves of prostrate holly are narrower than other types of holly. They are oval and oblong in shape and are bright green in color. They have a very unique texture: wrinkled and yet glossy. As with other hollies, this one produces bright red berries after the small flowers bloom on the female plants. Prostrate holly was first cultivated in the 1890s but it is still rare in the U.S.

How to Grow Ilex Rugosa

Growing prostrate holly is not difficult; the challenge may come in finding one. While not very common outside of its native range, a search online should turn up a nursery that can send you this shrub. Be sure you get at least one male and one female plant.

Prostrate holly is hardy to zone 5, but avoid using it in warm climates. It may not tolerate too much heat or dry weather.

Prostrate holly care is mostly hands-off once established, and even this is easy. Give your holly bush a spot that offers some sun and some shade and well-drained soil. Once in the ground, water the bushes every few days, and throughout the summer if you planted in the spring. Use a balanced fertilizer one a year and water only during droughts.

You can prune your shrubs to give them a nice shape, but a lot of trimming is not necessary. Protection from cold winter weather shouldn’t be needed either, as this is a winter-hardy shrub used to tough conditions.