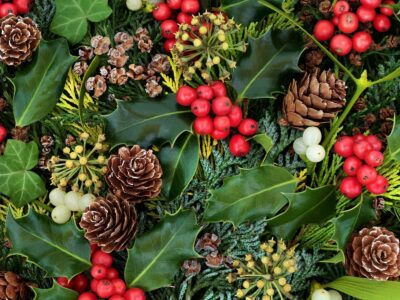 For those of us who celebrate and decorate for Christmas, holly and ivy leaves in wreaths and garlands may be among the first signs that the festive season has arrived.

The History of the Holly and the Ivy

In fact, the history of holly and ivy at Christmas is quite an interesting one, dating all the way back to the Romans. In those early times the leaves were believed to have protective powers. Over the centuries, the symbolism of holly and ivy Christmas decorations would continue to change, representing both prosperity and abundance.

Some avid gardeners may be especially interested to learn more about how to grow Christmas holly, as well as how to grow English ivy.

How to Grow Christmas Holly

Hardy to USDA zones 5-9, holly trees perform best when planted in full sun. However, they may benefit from part shade locations in regions with especially hot summer weather. Like many evergreen trees, holly plants prefer well-draining soil that is slightly acidic. At maturity, holly trees may reach heights upwards of 50 feet (15 m.).

How to Grow English Ivy

English ivy has long been planted for its ability to quickly and efficiently cover fences, walls, and even the sides of buildings. It is also a popular ground cover option for exceptionally shady backyards and sloped areas. Though it can be useful, there is much to consider before learning how to grow English ivy.

First, it’s important to research the plant’s status within your own growing zone. In many places, English ivy plants are considered an aggressive, invasive species. In fact, the plant is often listed among other noxious weeds throughout much of the United States.

As ivy vines sprawl across the ground, each plant begins to produce nodes which root into the soil. English ivy plants thrive in garden locations which are cool and shaded, but it can also be grown well in full sun. Large plant specimens can easily reach lengths of 100 ft. (30 m,) and are known to frequently escape regular ornamental garden cultivation.