What Is Canna Rust: Learn How To Treat Rust On Canna Leaves 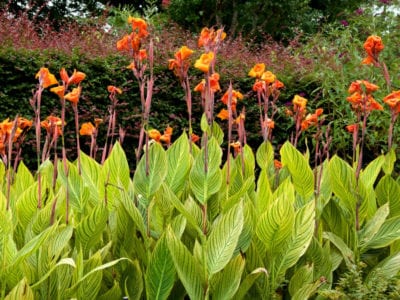 Canna lilies are glorious, tropical looking herbaceous perennials with rather awe-inspiring large leaves and colorful, huge, iris-like blooms. As showy as they are, however, the plants are susceptible to a variety of issues, one of which is rust on canna leaves. What is canna rust? Keep reading for information on canna rust, including canna rust symptoms and tips for treating cannas with rust.

What is Canna Rust?

Cannas growing in southern regions of the U.S. are more often afflicted with canna rust, a fungal infection caused by the pathogen Puccinia thaliae. While not usually deadly, severe infections can result in not only wilt and chlorosis of the leaves, but eventual death.

Symptoms first appear as yellow to tan pustules on the foliage and stems. These pustules are often parallel to the leaf veins. As they mature, they release large amounts of spores. Further into the infection, yet another type of spore develops, primarily on the lower surface but also somewhat on the upper surface.

These pustules turn brown and then black, the infected leaves dry and eventually drop prematurely. The fungus may also affect the blossoms of the canna. As the pustules burst, the spores are spread by wind and germinate in water droplets of susceptible host plants. The infection is then spread through natural openings.

The disease is called rust not because it initially is that color but because if you wipe a finger over a leaf with pustules, your finger will come away with a rusty brown stain.

If canna rust is identified, remove any leaves that appear to be infected and discard them as well as any severely infected plants. Do not compost the infected portions of the canna, as that will spread the fungus further.

To prevent canna rust, plant the canna in full sun and allow for plenty of air circulation. If fungicides are warranted, use copper products according to the manufacturer’s instructions.

Printer Friendly Version
Read more about Cannas
<PreviousNext>
Did you find this helpful? Share it with your friends!
FacebookTweetPinEmail
Related Articles
Newest Articles
You might also like…
Additional Help & Information