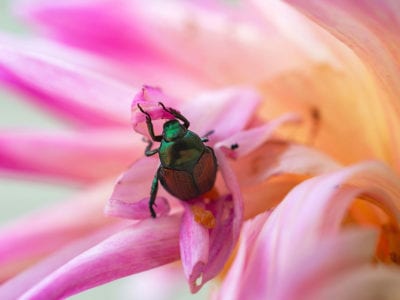 You don’t have to be a collector to appreciate the wide range of color and form found in the dahlia family. These exciting and diverse blooms are fairly easy to grow, but there are a few problems with dahlia that may limit their production and even their health. Dahlia pests and diseases are usually confined to sucking insects and fungal problems but a few diseases can actually kill the tubers. Watch for common dahlia problems and nip them in the bud quickly for continued blooms and healthy plants.

No matter how experienced you are as a gardener, some issues will arise with your plants. Those amazing flowers known as dahlias are no exception. Among the most common dahlia diseases are those caused by fungi, such as powdery mildew and gray mold. Dahlia flower pests tend to reflect the sap drinking forms but can also encompass leaf eaters such as a wide array of caterpillars and larvae. Knowing what to watch for is half the battle in keeping your prized plants healthy and beautiful.

Healthy, chubby tubers are crucial to big bountiful dahlias. You will have little chance of huge bunches of flowers if your tubers are scrawny, moldy or rotting. Start with healthy tubers first.

The first signs of trouble in your plants is often just as they sprout and develop leaves. It is common to find new leaves completely chewed, lacy and barely still there. The culprits are usually caterpillars or some form of larvae. These feed on leaf tissue and make Swiss cheese of the foliage, diminishing the plant’s ability to intake solar energy. Hand picking may be the solution to beating these types of problems with dahlia.

Fungal issues such as powdery mildew are another universal complaint. Avoid overhead watering and use a horticultural fungicide.

More sinister complications can arise in your dahlias which can sometimes kill the plant permanently. These may include:

Numerous insect pests find dahlias delicious. In addition to the caterpillars and larvae, sucking insects are probably going to be the biggest issue with the most widespread offenders being:

Although these are relatively tiny pests, their habit of sucking sap from the plant can diminish its health, cause stunting and distorted plant parts and even transmit disease. Horticultural soaps and blasts of water can minimize their presence.

Several types of borer are also dahlia flower pests. Systemic fertilizers may offer some protection if applied early in the season.

Slugs, snails and cutworms produce topical damage that is visually obvious and reduces plant health and attractiveness. Hunt at night with a flashlight and use the “squish” method of pest control for cutworms. Slugs and snails may be controlled with diatomaceous earth or slug baits.

As if there weren’t enough dahlia pests and diseases, the tubers are very susceptible to freezes, which makes the plants a challenge, but a worthy one, to northern gardeners.