Honey Fungus Identification – What Do Honey Mushrooms Look Like 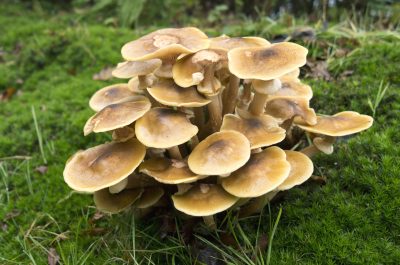 There’s a giant in the forest that is wreaking havoc on entire tree groves and its name is honey fungus. What is honey fungus and what do honey mushrooms look like? The following article contains information of honey fungus identification and honey fungus treatment.

What is Honey Fungus?

You see a cluster of unassuming mushrooms at most 6 inches (15 cm.) high and ¾ inch (2 cm.) across, but it’s what you don’t see that’s the mind boggling story behind honey fungus. The honey mushroom is actually the largest living organism in the world. What you see is only a very small portion of the actual size of the fungus. Honey fungus identification is made certain by what you don’t see beneath the soil surface and lurking inside infected trees.

So what do honey mushrooms look like? Honey mushroom fungus becomes visible in the spring when the fungus “blooms,” sending forth yellow-brown to honey colored toadstools with a unique white ring around the stem. The mushrooms produce white spores and can be found in small groupings around the base of dead or infected trees or shrubs. These toadstools last only a few days.

Honey fungus is the common name for several fungi, seven to be exact, within the genus Armillaria. Honey fungus spreads beneath the soil, infecting and killing the roots of perennial plants. Honey fungus produces tough rhizomorphs or fungal “roots” that spread through the soil in search of fresh hosts.

The most distinguishing feature of honey fungus is beneath the bark of infected roots of trees and at the base of the trunk where fans of white fungal mycelium can be viewed. This mycelium has a strong, sweet odor and a slight sheen.

The rhizomorphs radiate out from the established fungal colony and spread the fungus either via contact with tree and shrub roots or by root to root contact. Honey fungus spores also infect wounds and cuts on woody plants as well as herbaceous perennials and bulbs.

Of the seven species of Armillaria, only two, A. mellea and A. ostoyae, are the most aggressive. Others only infect plants that are already infected, under stress, or diseased.

How big can honey fungus get? Recently, an area in eastern Oregon, Malheur National Forest, was found to be infected with Armillaria. Scientists found that the fungus covered over 2,200 acres (890 hectares) and was at least 2,400 years old, maybe older!

Honey fungus control is difficult and extremely labor intensive. Since the evidence of toadstools and dying trees isn’t conclusive, steps need to be taken to positively identify the fungus with genetic fingerprinting techniques prior to undertaking any action.

Once the presence of honey fungus has been substantiated, what can be done to control it? Currently, there are no viable biological controls, although researchers have looked at antagonistic fungi to control the fungus.

Chemical controls are really only useful in a commercial situation wherein the soil is sterilized using approved products. Some growers use systemic application of fungicides, but these are expensive and labor intensive. Any chemicals are generally thwarted by the tough, protective sheath surrounding the rhizomorphs rendering them useless.

The only sure-fire method of control is through cultural practices. Use resistant species first of all. Avoid stressing the trees by watering consistently. Protect their roots from pests, disease, and mechanical injury.

Don’t replant an infected site for at least 12 months to starve the fungus out and then only plant resistant species. You can try to protect important specimens as yet unaffected by the fungus by burying heavy duty plastic sheeting around the root system down to a depth of 18 to 24 inches (46-61 cm.).

Infected trees can try to be saved by pruning off any infected roots if the infection is not too severe. Unfortunately, the pruning of infected stumps and roots often stimulates rhizomorph growth.

Otherwise, infected trees should be removed to prevent contagion. The stumps can be killed to halt the infection by the application of some non-selective herbicide products. If you choose to compost the infected tree material, be sure that your compost pile reaches high enough temps to kill the disease– otherwise, it’s best not to do so.