Leaf Gall On Azaleas: How To Treat Azalea Leaf Gall 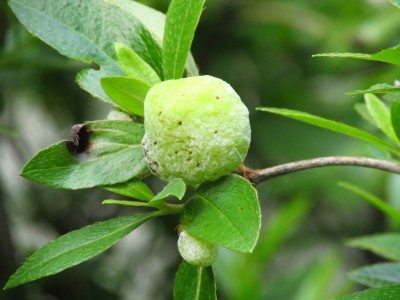 Image by Gardening Know How, via carol

Springtime isn’t the same without the precisely painted blooms of the azalea, floating in clusters just above the ground like big, vibrant clouds. Sadly, leaf gall on azaleas can ruin these picture-perfect moments by destroying leaf tissue, twigs, and buds and leaving severely disfigured tissue in its wake. Armed with azalea leaf gall info, however, you can protect your azaleas from this dreaded fungus and ensure many more breathtaking springs.

Unlike many galls that appear on woody plants and trees, leaf gall on azaleas is caused by the fungus Exobasidium vaccinii, a wind-borne fungus that can overwinter on bark and within buds; other fungi in this genus affect camellias, blueberry, and rhododendron. You’ll most often see azalea leaf gall appear during wet springs or on azaleas that are planted in corners or massed in tight groupings. The fungus needs considerable moisture to mature, so it won’t necessarily infect plants every year, even if the spores are present.

Like all plant galls, azalea leaf gall causes large fleshy growths to appear where they shouldn’t. On azalea, they’re usually on or within the leaves, growing up to four times the size of normal leaves. Although initially green, the galls take on a whitish cast as the fungus spreads and may become very thick or spongy. As they mature, galls begin to harden and turn brown before falling to the ground.

How to Treat Azalea Leaf Gall

Although it’s incredibly unsightly, azalea leaf gall treatment isn’t normally necessary in the home landscape. Instead, preventative measures should be taken to ensure the fungus doesn’t reappear next year. Plants most often affected are those with poor air circulation or planted in deep shade. The first order of business is to improve these conditions by thinning your azalea’s interior, cutting back nearby plants, or moving your shrub.

If the galls aren’t widely spread, you should cut them from your bush and dispose of them immediately to reduce the number of spores available to further the infection. Remove the dark, hard galls before they hit the ground, and make a concentrated effort to keep all the debris cleaned up around your plant. In severe cases, weekly applications of neem oil can reduce the number of viable mold spores once the leaves start showing signs of attack.