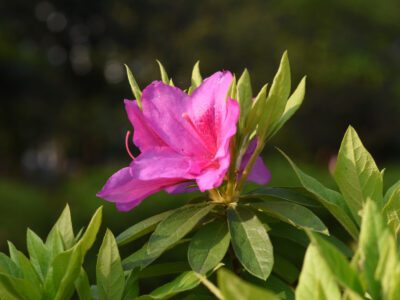 Azaleas are often grown in the home landscape not only for their beauty, but for their hardiness. As hardy as they are though, there are still a few diseases that can affect azalea shrubs. One of these is phytophthora root rot. If you suspect that your azalea has been affected by phytophthora fungus, keep reading to learn more about the symptoms and ways to treat it.

Phytophthora root rot is a disease that affects azaleas. For an azalea owner, seeing signs of this disease can be devastating as the disease is difficult to control and cure.

Symptoms of a phytophthora fungus infection normally begin with reduced growth in the azalea plant. Overall growth will be less and what growth there is will be smaller. The new branches will not grow as thick as they once had and the leaves will be smaller.

Eventually, the phytophthora disease will affect the leaves. Leaves on the azalea will start to shrivel, curl, droop, or lose their shine. In some cultivars, the leaves will also change color to red, yellow, or purple in late summer through fall (this is only a problem if your azalea has not previously changed color at this time).

A sure sign that your azalea has phytophthora root rot is that the bark at the base of the azalea shrub will be dark and reddish or brownish. If the phytophthora disease is advanced, this discoloration may have already moved up the trunk to the branches. If you were to dig up the azalea plant, you would find that the roots also have this red or brown coloration.

If your plant is already infected with phytophthora root rot, unfortunately, it is very difficult to treat. First, remove and destroy any damaged branches and stems. Next, treat the soil around the plant with fungicide. Repeat the fungicide treatment every few months. Continue to remove any infected branches or stems that you may find as time goes by.

If your azalea plant is badly infected with phytophthora root rot, it may be best to simply remove the plant before it infects other plants in your yard. Phytophthora root rot not only affects azaleas, but several other landscape plants as well. As mentioned, phytophthora root rot fungus moves quickly through wet soil. If you are experiencing heavy rains or if the soil in your whole yard drains poorly, you may want to consider removing the infected azaleas regardless of how advanced the phytophthora disease is in order to protect other plants.

If you need to remove your azalea shrubs, remove the entire plant as well as the soil it grew in. Destroy or discard both. Treat the area where the azalea shrub was with fungicide. Before planting anything else in that area, be sure to add organic material to improve drainage of the soil.