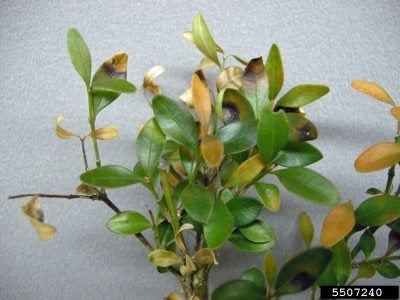 Boxwood blight is a relatively new plant disease that ruins the appearance of boxwoods and pachysandras. Find out about the prevention and treatment of boxwood blight in this article.

What is Boxwood Blight?

Discovered in the U.K. in the mid 1990’s, the disease didn’t make its way to the U.S. until October 2011, where it was detected in a nursery in North Carolina. It has since spread as far north as Massachusetts and can be found in isolated areas across the U.S. Boxwood blight symptoms are similar to the symptoms of other diseases that infect boxwoods. The first sign is round, brown spots on the leaves. The shrub then drops most, or all, of its leaves and the twigs begin to die back.

The roots aren’t affected, so the shrub may regrow. Plants don’t usually die of boxwood blight disease, but after repeatedly losing its leaves, it becomes so weak that it has no resistance to other diseases. Secondary infections usually attack and kill the plant.

How to Control Boxwood Blight

There is no cure for boxwood blight, so gardeners must rely on disease prevention to protect their plants. Take these precautions when working around boxwoods and pachysandra:

Horticulturalists are testing several methods of treatment, but the current recommendation is to remove and destroy the plant by burning it or bagging and disposing of it. Don’t replant boxwoods in the area where you removed diseased plants.