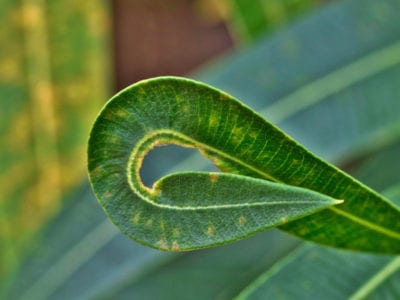 Oleander shrubs (Nerium oleander) are tough plants that typically need little care to reward you with a profusion of colorful flowers in summer. But there are some diseases of oleander plants that can compromise their health and hinder their ability to bloom.

Bacterial pathogens are the culprits behind the primary oleander plant diseases, although some fungal pathogens may also infect oleanders. These organisms can infect plants through pruning cuts, and they’re often transmitted by insects that feed on the plant tissue.

Some diseases of oleander plants may look like other oleander problems, such as cultural disorders that include insufficient water or nutrient deficiencies. Troubleshooting tip: Take a plant sample to your local Extension office for their expert diagnosis of specific oleander problems.

Oleander leaf scorch is caused by the bacterial pathogen Xylella fastidiosa. Symptoms include drooping and yellowing leaves, which are also symptoms of drought stress or nutrient deficiencies. However, if an oleander is drought-stressed, the leaves begin turning yellow at the middle and then spread outward.

Leaf scorch disease causes leaves to begin turning yellow from the outside edges toward the middle. Another way you can identify leaf scorch from drought stress is that wilted oleander plants suffering from leaf scorch do not recover after you water them.

Oleander knot is caused by the bacterial pathogen Pseudomonas savastonoi pv. nerii. Symptoms include the appearance of knotty growths, called galls, along the stems, bark, and leaves.

Witches’ broom is caused by the fungal pathogen Sphaeropsis tumefaciens. Symptoms include a closely massed group of new stems that arise after shoot tips die back. The new stems grow only a few inches (5 cm.) before they also die.

While there are no cures for these bacterial and fungal problems, there are steps you can take to help prevent or control oleander plant diseases.

Caution: All parts of oleander are toxic, so use caution when using any oleander disease treatment. Wear gloves if you handle the plants, and don’t burn diseased limbs, because the fumes are also toxic.