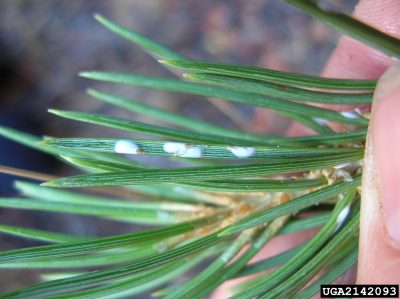 When it comes to the number of pests that can attack our plants, especially outdoors, the list is long and covered with suspects. Pine trees are vigorous giants who seem to be so firmly rooted and powerfully strong that nothing can hurt them. However, scale on pines can take down even the biggest, most vigorous tree over time. What is pine needle scale? Read this article and we’ll learn together the signs and pine needle scale control for this silent killer.

What is Pine Needle Scale?

Pine needle scale is a common issue on pine trees. It primarily infects Scotch, Mugo, and Ponderosa, but it is also found in some firs and other species of pine. Scale starts out slowly and can gradually infest all the parts of the plant, but it takes several seasons with perfect weather conditions and often starts in stressed plants. Park managers know how to treat pine needle scale and prevent it from spreading to other plants. At home, management of your trees is important to confine the insects and save your trees.

Pine needle scale will appear to be whitish scabs on the needles and stems of the plant. The scabs, or scales, will cover the insect and protect it over winter. Eggs that overwintered will hatch in May releasing crawlers, the nymph stage of development. This is the optimum time for chemical pine needle scale control.

Crawlers move away from the hatch sight and find a new home. They then attach themselves to the plant and form a new scale crust over their bodies. As they feed under this armor, they undergo several molts, feeding on plant juices the whole time. Finally, pairs mate, and the next generation of eggs is laid. Pine needle scale can produce two generations per year.

How to Treat Pine Needle Scale

Early detection is key to successfully treating pine needle scale. The scales are 1/10 inch (0.25 cm.) long and may be hard to find, but heavily infested plant parts will have a distinctive whitish cast to the needles and stems, almost as if they have been dipped in wax.

May to June is when nymphs or crawlers emerge and the adults are mating and laying eggs by July. The next generation is laid by August. If you see an infested branch, prune it out to prevent the insects from spreading. Keep the plant watered and fed to reduce any stress and keep it healthy enough to deal with mild infestations.

Several lady beetles and wasps are important pests of scale, so reduced use of non-specific pesticides is recommended to encourage these insects.

Dormant oil applied in March to early April can have some impact on the population but insecticidal soaps are even more effective. Apply after eggs have hatched and while crawlers are active, but before they settle down and form scales.

Most chemicals have little effect on scale when they are in their cocoons. You have to get them when the crawlers are moving about. Registered pesticides may be used from May through early July. It is most important to get the first generation, as they will be the parents of the second generation.

Use all cautions if you apply a chemical solution and be aware that some of the non-selective types are also targeting beneficial insects.