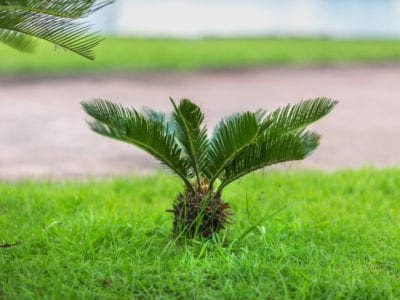 Frizzle top is the name of the condition often seen in manganese deficient sagos. Manganese is a micronutrient found in the soil that is important to palms and sago palms. Read on to learn more about treating this problem in your sagos.

Sometimes the soil just doesn’t have enough manganese. Other times manganese deficient sagos are seen in soils with a pH that is too high (too alkaline) or too low (too acidic) and sandy. This makes it too difficult for the soil to retain manganese. It is also more difficult for the sago palm to absorb manganese when the pH is off. Sandy soils also have a hard time retaining nutrients.

There are multiple methods available for treating manganese deficiency in sagos. For the most immediate but temporary results, you can spray the leaves with 1 tsp. (5 ml.) of manganese sulfate dissolved in a gallon (4 L.) of water. Do this for three to six months. Applying manganese fertilizer for sago palm frizzle top often corrects the problem.

Spread the manganese sulfate under the canopy and apply irrigation water at about 1/2 inch (1 cm.) for the area. Your sago palm will probably take several months to half a year to recover. This treatment will not fix or save the impacted leaves but will correct the problem in new leaf growth. You may need to apply manganese fertilizer for sago palm annually or bi-annually.

Know your soil pH. Use your pH meter. Check with your local extension or plant nursery.

Treating manganese deficiency in sagos is quite easy. Don’t wait until your leaves get completely brown and frizzled. Jump on the problem early and keep your sago palm beautiful year-round.