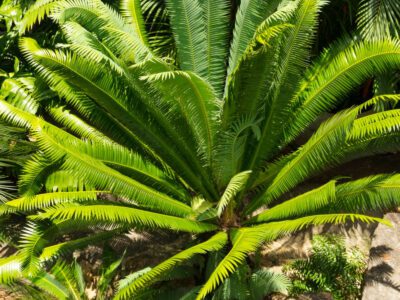 Sago palms are one of the oldest types of plant life still alive. The plants belong to the family of Cycads, which aren’t really palms, but the leaves are reminiscent of palm fronds. These ancient plants are common in the landscape and lend a tropical air to gardens, even in temperate zones. Usually the plant has one main stem separating out to several slender stems topped with wide sets of leaves. Occasionally, however, you will find sago with multiple heads, which is a natural aberration that creates a unique silhouette.

What Causes a Sago with Multiple Heads?

Sago palms grow from a center crown. As they age, the dropping of old stems and the addition of new creates a scarred, rough trunk. The trunk is usually a single trunk, but occasionally a double headed sago palm will occur. This can happen due to environmental changes, stress on the plant, or just because nature deemed it time for a surprise!

These multi-headed sagos are not something to dislike but rather a cause for celebration. The abnormality adds intrigue and interest to a standard form. Your friends will be jealous.

These curious Cycads also form pups, or offsets, which rise from around the main trunk and look like mini versions of the parent. These offsets can give the appearance of a sago with multiple heads but provide an easy way to propagate the plant.

These little sago babies can be cleaved (or severed) from the parent plant to start a new plant. Most pups detach easily, but you may have to excavate to remove the roots of older starts. Removal should be done when the sago is dormant in winter.

Take off the leaves and set the pups in a dry place so the cut area can harden off. Place the callused end in a half and half mix of peat moss and sand to allow them to get rooted and established.

Should You Prune Sago Heads?

It is not a good idea to prune multi-headed sagos. Cutting into the flesh could kill them, as Cycads do not heal over to prevent insects, bacteria, or fungal spores from entering. Trees will seal the wounds made by pruning, but sagos do not have that ability.

The only thing you should prune off is any dead stems, but it is not even necessary as the plant is self cleaning. Pruning should wait until all danger of frost has passed.

If you truly hate your double-headed sago, don’t cut it. Dig it up and give it to someone who will appreciate the fanciful appearance. If you choose to prune sago heads off the plant, be aware you could cause long term injury or even death to your graceful Cycad.