Should You Prune Sago Palm Trees: How to Prune A Sago Palm 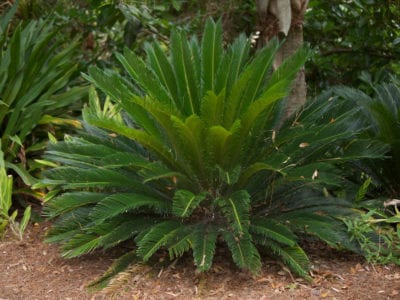 While sago palms can enhance nearly any landscape by creating a tropical effect, unsightly yellow-brown foliage or an over-abundance of heads (from pups) might leave one to wonder if you should prune sago palm. Keep reading to learn more about how to prune a sago palm.

Oftentimes, unsightly yellow fronds are a signal of a nutrient deficiency, which can usually be remedied with a boost of fertilizer, such as palm food or even citrus fertilizer. Poor, sickly looking plants can also be rejuvenated with manganese sulfate (amounts vary with plant size, from an ounce (28 gr.) for small sagos on up to 5 lbs (2 kg.) for larger ones) watered into the soil. Deficiencies in manganese are common in these plants. Note: do not confuse this with magnesium sulfate, which is the main ingredient found in Epsom salts and commonly used for treating magnesium deficiencies. To reduce the chance of nutrient deficiencies, sago palm should be fertilized at least every six weeks during the growing season.

Although some people feel the need to prune sago palm by removing these yellowing fronds, this is not recommended, especially on the lower leaves of deficient palms. This can actually cause the problem to worsen, moving up to the next tier of leaves. Even as yellow leaves are dying, they are still absorbing nutrients which, if removed, could stunt plant growth or leave it susceptible to infections.

How to Prune a Sago Palm

Pruning sago palms should never be excessive. Only remove completely dead, badly damaged, or diseased foliage. If desired, the fruit and flower stalks can be pruned as well. In addition to decreasing growth, cutting the green fronds can weaken the plant, making it more susceptible to pests and diseases.

Cut the oldest and lowest leaves as close to the trunk as possible. In some cases, all but the very top fronds are removed—but this would be extreme. You should also refrain from trimming sago palm leaves that are roughly between a ten and two o’clock position.

Mature sago palms develop offsets, or pups, at the base or along the sides of their trunk. These can be removed in early spring or late fall. Gently dig and lift them from the base or pop them from the trunk with a hand trowel or knife.

If you’d like to create additional plants using these pups, simply remove all the foliage and lay them out to dry for a week or so. Then you can replant them in well-drained, sandy soil. Place half of the rootball just below the soil surface. Water thoroughly and keep the new pups in a shady area outside or a bright location indoors until rooting takes place — usually within a few months. Allow them to dry out some between watering and once roots appear, begin feeding them with a low dose of fertilizer.