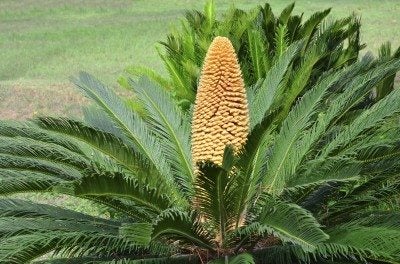 Sago palms only bloom once every three to four years with either male or female flowers. The flowers are actually more of a cone since sagos aren’t really palms but are cycads, the original cone forming plants. Some gardeners find them unattractive. So can you remove a sago plant flower without damaging the plant? Read on for the answer.

As stated previously, sago palms are either male or female. Females form a flat, slightly rounded cone with rich, golden tones. The male cone resembles a pine cone and is more erect, growing up to 24 inches (61 cm.) tall. If the two are nearby, the male pollen fertilizes the female sago palm flower head and around December bright red seeds will form on her. These will naturally disperse through birds and wind, and the “flower” parts will disintegrate.

The majestic fronds of the palm add a tropical touch while the slow growth of sagos makes them easy to manage. The cones are not particularly ugly but don’t have the same panache as a traditional flower. Flower removal is not recommended if you want to harvest the seed. For this purpose, wait until the seeds turn deep red and then they will easily pop out of the spent cone. The remaining material will slough away, leaving a scar in the center that new leaf growth will soon cover. Cutting off sago flowers is really only necessary if you need to fertilize plants that are some distance away.

Can You Remove a Sago Plant Flower?

If the flower is truly bothering you or if you do not want the plant to reproduce for some reason, sago palm flower removal is your best option. Use a very sharp knife to cut out the cone at its base. However, consider that a sago plant must be 15 to 20 years old or older to bloom, so this is a pretty rare and interesting event.

You may also need to cut out a male flower to fertilize a female that is not nearby. Male cones stay viable for a few days when stored in a plastic bag. After removal, simply shake the male over the opened female flower. You can pollinate several females by cutting off sago flowers from a male. He may only produce one cone but often there are multiples. Do not remove the female after pollination, as she cannot make seed without nutrients and moisture from the plant.

Leave the female sago palm flower head until she is ripe. You can harvest the entire flower with a knife or just pull out the walnut sized seeds. Soak the seed in a bucket for several days, changing the water daily. Discard any seed that floats, as it is not viable. Pull off the orange seed coating using gloves to prevent staining your hands. Allow the seeds to dry for a few days and store in a cool location in airtight containers. At planting, soak the seeds again to enhance germination.