Fixing White Spots On Sago Palms: How To Get Rid Of White Scale On Sagos 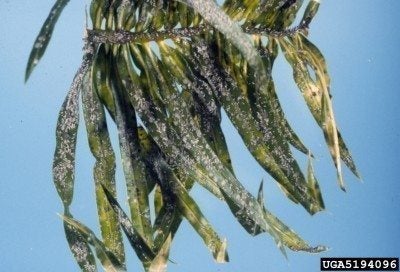 Sago palms are actually not palm trees but an ancient plant form called a Cycad. These plants have been around since the time of the dinosaurs and are hardy, tenacious specimens, but even the mighty may be laid low by tiny little pests. In this case, if a sago palm has white dots, you need to be ready for battle. White spots on sago palms are likely an introduced form of scale insect, which has become almost an epidemic in warm regions of the country where sagos naturally grow. To prevent the death of the cycad, you need to know how to get rid of white scale on sagos.

Cycad aulacaspis is only tempted by plants in the cycad family. Once you see it, you have an infestation that is very difficult to get rid of since it is likely on neighboring sagos and can be blown onto plants with each gust of wind.

The appearance of white fuzzy stems, leaves, and trunks signals a huge problem. Scale is a tiny sucking insect and, in high populations, the bugs can sap the plant of much of its life-giving fluid and kill it.

The insects have a protective waxy armor, which is white to yellow. They are so tiny that finding the problem before the plant is overrun is almost impossible. Once the population has bloomed, all parts of your plant can be infected and the pest’s presence is obvious.

How to Get Rid of White Scale on Sagos

Treating sago palm scale is crucial to rescuing the plant’s health, but it’s not an easy process. This is because the insects can just blow back onto revived plants and their ability to hide in cracks, and even the roots, prevents some controls from working completely.

First prune off any infested fronds. Then apply paraffin based horticultural oil to all parts of the plant. Mix 3 tablespoons (44 ml.) of oil with water and spray the entire palm. Don’t forget under the leaves and the trunk. Apply two to three times with five days between each application. Neem oil can also be used.

For better control, use a systemic insecticide. These work best as soil drenches applied at the rate recommended by the manufacturer. The benefit of these is that the roots take up the chemical and the insects suck it out and die. It also can get the persistent scale on roots.

There is a beetle and wasp that are being studied for treating sago palm scale. As natural predators, they would be effective in reducing populations in a non-toxic manner. Unfortunately, they are not commercially available.

Persistence is usually the rule when treating sago palm scale. Don’t forget to spray consistently or the pests will make a grand return.

When a sago palm has white dots, it might just be a natural occurrence. It might be mistaken for scale insects but is not. This is instead called scurf on sago palms. It is a normal condition, and the scurf will eventually fall off as the leaf matures.

The appearance is white and forms in raised, elongated bumps that line up along the rachis and the leaflets. There doesn’t seem to be any purpose to scurf on sago palms, but it doesn’t damage the plant and does not require treatment.