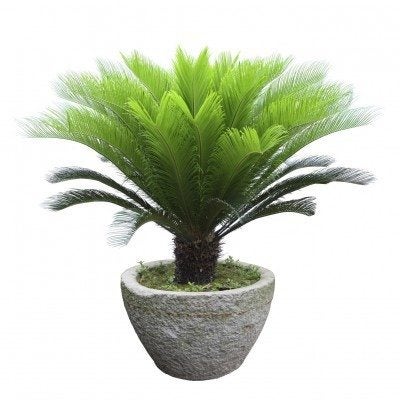 Sago palms actually aren’t palms but ancient ferny plants called cycads. However, to remain a healthy green, they need the same type of fertilizer that genuine palms do. To find out more about their nutritional needs, and when to feed sago palms, continue reading.

Fertilizing a sago palm plant isn’t too difficult. Your sago palms will absorb nutrients best when growing in well-drained, rich, and slightly acidic soil with a pH between 5.5 and 6.5. Otherwise they may develop either a magnesium deficiency, which is indicated by the yellowing of older leaves, or a manganese deficiency, in which the younger leaves yellow and shrivel.

Keep in mind that a lawn fertilizer applied near sago palms may also adversely affect their nutritional balance. To prevent this problem, you either can refrain from feeding the lawn within 30 feet (9 m.) of the plants or feed that entire stretch of sod with the palm fertilizer as well.

When to Feed Sago Palms

Fertilizing a sago palm requires that you provide evenly spaced “meals” throughout its growing season, which generally runs from early April to early September. It’s a good idea, therefore, to feed your plants three times per year—once in early April, once in early June, and again in early August.

Avoid feeding sago palms which have just been transplanted into the ground, as they will be too stressed to have an “appetite.” Wait two to three months, until they are well established and begin putting out new growth, before you attempt to fertilize them.

How to Fertilize Sago Palm Plants

Choose a slow-release palm fertilizer, such as 12-4-12-4, in which the first and third numbers—indicating nitrogen and potassium—are the same or nearly the same. Check to make sure that the formula also contains micronutrients such as manganese.

For sandy soil and a palm which receives at least partial sun, each feeding will require 1 ½ pounds (.6 kg.) of sago palm fertilizer for every 100 square feet (30 square m.) of ground. If the soil is heavy clay instead or the plant is growing entirely in shade, use only half that amount, 3/4 pound (.3 kg.) of fertilizer per 100 square feet (30 square m.).

If possible, apply your fertilizer just before a rainfall. Simply scatter the supplement evenly over the surface of the soil, covering the entire space under the palm’s canopy, and allow the precipitation to wash the granules into the ground. If there is no rain in the forecast, you will need to water the fertilizer into the soil yourself, using a sprinkler system or watering can.