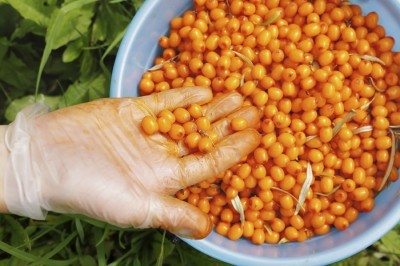 Sea buckthorn plants are hardy, deciduous shrubs or small trees that reach between 6-18 feet (2 to 5.5 m.) at maturity and produce brilliant yellow-orange to red berries that are edible and high in vitamin C. In Russia, Germany, and China where the berries have long been popular, there are thorn-less cultivars that have been developed, but those available here, unfortunately, have thorns which makes buckthorn harvesting difficult. Still, buckthorn harvesting is well worth the effort. Keep reading to find out about harvesting sea buckthorn berries, when seaberries are ripe, and uses for seaberries.

Seaberry, or sea buckthorn (Hippophae rhamnoides), resides in the family, Elaeagnacea. Native to the temperate and sub-arctic regions of the Northern Hemisphere, sea buckthorn has more recently become available in North America. This hardy shrub makes a lovely ornamental with the bright colored berries and also makes wonderful habitat for birds and small animals.

The plant is actually a legume and, as such, fixes nitrogen in the soil while its strong root system aids in preventing erosion. Seaberry is hardy to USDA zones 2-9 (hardy to at least -40 degrees F. or -25 C.) and is susceptible to very few pests.

The fruit of sea buckthorn is high in vitamin C, as well as vitamin E and carotenoids. In European and Asian countries, seaberries are cultivated and harvested commercially for the nutrient juice of the fruit as well as the oil pressed from its seeds. The Russian seaberry industry has been thriving since the 1940s when scientists investigated biological substances found in the fruit, leaves, and bark.

The result went beyond the use of the fruit juice for flavoring sauces, jams, juices, wine, tea, candy, and ice creams. Referred to as “Siberian Pineapple” (a misnomer since the fruit is rather acerbic, hence more like citrus), these scientists invented uses for the substances as far-reaching as space; they created a cream made from seaberries that supposedly protects cosmonauts from radiation!

Seaberry is also used medicinally and dates back to the time of Alexander the Great. In this period of history, soldiers are known to have added seaberry leaves and fruit to their horses’ fodder to boost their overall health and make their coats shiny. In fact, this is where the botanical name for seaberry is derived, from the Greek word for horse – hippo – and to shine –phaos.

The Chinese also made use of seaberries. They added the leaves, berries, and bark to over 200 medicinal as well as food-related tinctures, plasters, etc., to treat everything from eye and heart ailments to ulcers.

It’s shortly before the first freeze and the good news is that it’s sea buckthorn harvest time! The bad news is there isn’t really an easy way to harvest the berries. The berries grow in a very tight clump, making them difficult to pick – that and the thorns. They also lack an abscission layer, meaning the berry does not detach from the stem when it is ripe. In fact, it pretty much has a death grip on the tree. So how can you harvest the berries?

You can take a pair of sharp pruning shears and judiciously snip the berries out of the tree. Try to do this somewhat sparingly, so the tree doesn’t look hacked at. Any berries left on the tree will be food for the birds. Apparently, you can then freeze the berries right on the branches. Once the berries are frozen, they are easier to remove. Commercial growers harvest in this manner, although they have a machine for this. Also, harvesting should only be done every two years to give the trees time to recover from the pruning.

There is some scuttlebutt that the berries can be harvested by knocking them off the limbs. But, because they adhere themselves so tightly to the branches, I’m doubting the viability of this practice. However, most everything is worth a try. Spread a sheet or tarp beneath the tree and commence bashing at it. Good luck with that!

For the home grower, probably the best way to harvest is by hand picking. A bit tedious if you aren’t in the mood perhaps. Turn it into a party! Invite some friends over and involve the kids with a watchful eye on the thorns. The resulting juice will keep you in vitamin-rich preserves, sorbets, and smoothies during the winter months.